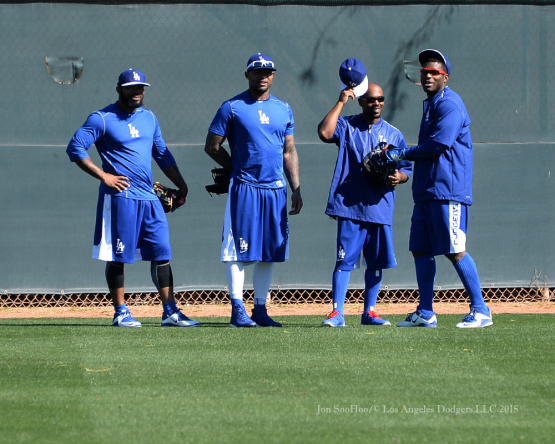 GLENDALE, Ariz. — Jimmy Rollins knows he’s in a weird spot at the moment.

The Dodgers’ new shortstop wants to be a leader in the clubhouse. He’s 36. Only seven active players have played more games than Rollins’ 2,090, so he’s seen just about everything. Still, he’s only been here about a week. That’s how much time most of Rollins’ teammates have had to get to know him personally — everyone, really, save new reliever Mike Adams.

“I’m still a veteran; they know who I am,” Rollins said. “I still go say hello but it’s different because that (the Philadelphia Phillies) was the club I was on, I helped build. I’m coming in on somebody else’s territory.”

If anyone in the clubhouse has an excuse for missing the Jimmy Rollins career arc, it’s Yasiel Puig. It’s easy to forget, but Puig has only been in the United States less than three years.

Having two hours recently to sit and talk helped.

“I just walked over to him and we just started talking,” Rollins said. “Two hours later it was ‘I gotta go now.’ My wife was probably like ‘where you at? You said you were done. The baby’s crying.’

“You can’t make that happen. You can’t force it, to talk to somebody for two hours. It was a good thing and I was happy I did it. I was going to do that anyway with a number of guys on the team. He happened to be here by himself, with his cousin actually, who acted as the interpreter. It was just an opportunity and I took advantage of it.”

What did they discuss?