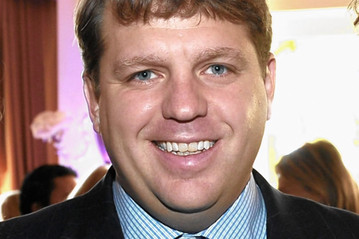 Todd Boehly reportedly contributed $100 million to the purchase of the Dodgers in 2012. (Getty Images)

The New York Post is reporting that Todd Boehly, one of the six Guggenheim Baseball Management partners that owns the Dodgers, “is looking to strike out on his own.”

Boehly — who helped pull together the complicated deal for the MLB franchise as the No. 2 executive at Guggenheim Partners — is considering leaving the investment firm and running his own shop, according to sources.

“Todd is exploring the possibility of owning his own firm, which would be focused on acquiring and owning private businesses and real estate,” said one source familiar with Boehly’s thinking.

Another source said the discussions were at an advanced stage.

“Todd is out, and they’re working on a way for him to exit,” the source said.

The news comes two months after Korean-language website JoongAng Daily reported that a consortium of South Korean investors were seeking to purchase a 20 percent stake in the Dodgers. Forbes reported March 13 that a potential deal with the group was still on the table. Based solely on the timing of the news, it makes sense if Boehly’s share of the team was the portion going up for sale.

Boehly helped get Time Warner Cable to bankroll the largest payroll in baseball history — a deal that was good for the Dodgers’ bottom line but so far bad for most fans, who cannot watch the team on SportsNet LA. Boehly reportedly contributed $100 million to the purchase of the club in 2012.