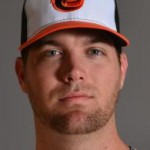 The Dodgers released Ryan Webb today, ending the remarkably interesting saga of a man who never pitched a game in a Dodgers uniform.

Update (6:15 p.m.): The Cleveland Indians signed Webb and assigned him to their Triple-A affiliate.

Webb, 29, was traded from the Baltimore Orioles to the Dodgers four days ago for two minor leaguers, pitcher Ben Rowen and catcher Chris O’Brien, and the 74th overall pick in the 2015 draft.

The Dodgers quickly outrighted Webb to Triple-A Oklahoma City. That removed him from the roster, but Webb was still owed $2.75 million in the final year of his contract. He promptly refused the outright assignment, and his release all but guarantees he will never pitch a game for the Dodgers this season.

So, what just happened?

MLBtraderumors.com broke down the trade from both teams’ standpoints. Charlie Wilmoth’s piece explains what the Dodgers were up to:

A 2013 study found that the net value of a pick in the No. 61-100 range was $2.58MM, very close to the prorated portion of Webb’s $2.75MM salary the Dodgers are taking on. Add in that No. 74 is closer to the top of that range and add a bit of salary inflation since then, and the value of the pick is likely high enough for the trade to make financial sense for the Dodgers, even if we assume it’s possible that Rowen and O’Brien will provide a bit of value (and if we assume the Dodgers need to think about their budget the way other teams do). The Dodgers also receive a bit of draft pool flexibility with the acquisition of the pick, which could help them lure tougher-to-sign players.

Whether MLB would want deep-pocketed teams like the Dodgers essentially buying draft picks is a different question, although for now, the effects of them doing so are fairly minimal. Teams are currently only allowed to trade Competitive Balance picks, so a draft pick can only make a small impact on a trade, since Competitive Balance picks occur after most marquee talents are off the board.

The piece also lists the eight competitive balance picks that have been traded prior to this one. Since all were traded within the last two years, it’s way too soon to speculate on the exact return of this investment.

In short, it’s way too soon to evaluate what this trade means for the Dodgers, besides the fact that they still have considerable money to throw around. Also, the sun came out today.