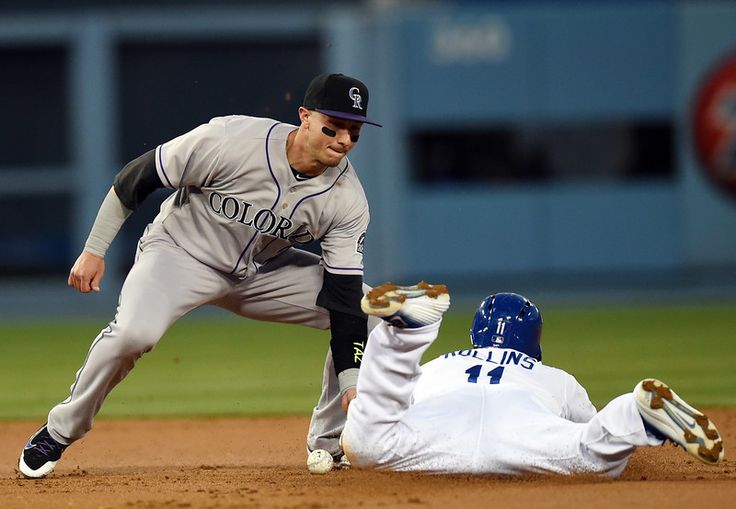 Jimmy Rollins stole his third base of the season in the Dodgers’ 7-3 win over the Colorado Rockies. (Photo by Hans Gutknecht/Staff photographer)

The Dodgers and Colorado Rockies are tied for first place following the Dodgers’ 7-3 win, their fifth straight. The Dodgers won’t always be this hot, but they can always draw on some lessons from this winning streak.

I couldn’t squeeze all of Clayton Kershaw‘s postgame remarks into the story. That’s a shame, because the fact that he did not win his first game until his third start is significant for a pitcher who’s won three of the last four National League Cy Young Awards. Here’s what he said:

“(This start) was a little bit better (than the first two). Obviously too many pitches (104), but give credit to the Rockies. They did a great job of battling and fouling off pitches. But my job is to go seven or eight innings every time. There are things that I’d like to get better at, but it feels good to get a win. I just keep riding these guys’ coattails, the way they’re swinging the bats. They’re doing awesome.”

“I think my fastball location was a little better (tonight). I still missed up quite a bit, like I did with those two heaters on the home runs. But I’m still getting better with the off-speed stuff and I worked that in a little bit more. So it’s a step in the right direction, but there’s definitely some room for improvement.”

For the Rockies, it was their first road loss of the season after entering the game 6-0 away from Coors Field, halting a franchise record.