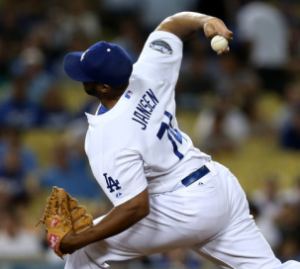 Kenley Jansen begins his rehab assignment tonight for Single-A Rancho Cucamonga. He’s expected to pitch the first inning, then come out of the game. If all goes well, he’ll start again for the Quakes on Sunday.

The rehab assignment is expected to span “at least 5 or 6” appearances, according to Dodgers manager Don Mattingly. In theory, then, Jansen might rejoin the Dodgers on May 11, when they return home from next week’s road trip through Milwaukee and Denver.

“I’m not sure what we’ll do,” he said. “The way our bullpen works right now, I think that’s what we’ll — as long as Kenley’s healthy and able to go back-to-back, and we’re not trying to protect him in any way. At some point I think that’s what we’d like to get to. Now is that the first time out or second time out? I don’t know if we’re going to be able to do that, if we’re going to be able to ease him back in, or if it just jumps right into that.”

The way the Dodgers bullpen works right now is interesting. Four different pitchers have pitched in save situations. Lefty-righty matchups have dictated where certain pitchers have pitched. The inning of the game has too, to an extent, along with how much leverage the hitting team holds in the situation. A chart is useful:

To interpret: Juan Nicasio usually pitches with the Dodgers are trailing on the scoreboard (the “BHD” column). Pedro Baez, Yimi Garcia, Paco Rodriguez and J.P. Howell frequently pitch when the Dodgers are ahead (the “AHD” column) and in high-leverage situations (as measured by “ALI”). Joel Peralta has gotten the most save opportunities (SVOPP) and saves (SV) but is currently on the disabled list.