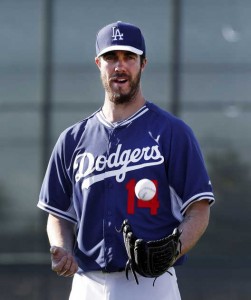 Former Dodger Dan Haren is off to a 4-1 start with the Miami Marlins and will get the start against the Dodgers on Tuesday. (Associated Press)

Former Bishop Amat and Pepperdine baseball star Dan Haren also had a homecoming of sorts, returning to Dodger Stadium for the first time since the offseason trade that sent Haren and Dee Gordon to the Miami Marlins.

Like Gordon, Haren has blazed to an impressive start with the Marlins, posting a 4-1 record with a 2.68 ERA and 24 strikeouts and eight walks in 37 innings. He also has a microscopic 0.92 WHIP (walks plus hits divided by innings pitched).

But Haren downplayed his return to Southern California.

“It’s not as different as you would think,” Haren said. “I’ve pitched here like 30 times in my life. I’ve probably been on the visiting side as often as I’ve been on the home side.

“It’s nice to be home and everything. But I’m not going to make too much of it. I’ve been on a lot of teams. I don’t get excited to face former teams anymore.”

The Marlins are Haren’s seventh team.

Haren had threatened to retire at the time of the deal because he wanted to spend time with his family. But Haren accepted the $10 million deal to play for Miami and made it work with his family.

Haren said he saw his family the first week of the season and also this past weekend in San Francisco.
Haren relished the idea of taking his kids to school on Monday.

“Any time I’m in L.A., it’s always good to see family and friends come to the games,” Haren said. “A lot of extended family. Cousins and uncles.