The parade of rehabbing Dodgers pitchers continued on Sunday.

Brandon Beachy, trying to rebound from Tommy John surgery, was slated to throw 50 pitches on Sunday for triple-A Oklahoma City in his second start.

Reliever Pedro Baez, who has missed 36 games with a right pectoral strain, will make his second appearance for triple-A Oklahoma City.

Brandon League, out the entire season with a right shoulder impingement, will make his second rehab appearance and his second with Oklahoma City. He is expected to go one inning.

Reliever Joel Peralta, out since April 26 with shoulder soreness, was in the Dodgers clubhouse and said he expects to be activated soon. 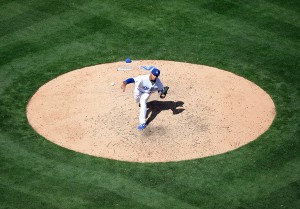 Dodgers pitcher Joel Peralta has been on the disabled list since April 25. (Getty Images)

Peralta said he will play catch Sunday at Dodger Stadium and a decision will be made on whether he joins the team on the roadtrip in Chicago.

Peralta pitched back-to-back games for single-A Rancho Cucamonga on Friday and Saturday, throwing around 89 mph.
“I was throwing and hitting my spots,” Peralta said. “One day was better than the other one. The last day was the better one. I gave up one run, but I felt better, my pitches hit the mark and I had more movement.”