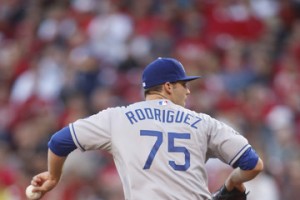 Rodriguez has been attempting to pitch through a bone spur in his left elbow. Dodgers manager Don Mattingly said it’s working so far — at least, that Rodriguez’s fastball velocity during his rehab was consistently in the 86-89 mph range that it needs to be for him to be effective.

Then Mattingly added that Rodriguez’s rehab is over and the lefty will meet with team physician Dr. Neal ElAttrache before rejoining the team in Arizona on Monday.

Why the meeting with ElAttrache?

“I’m not sure,” Mattingly said. “He’s going to see ElAttrache.”

What makes this interesting is that nothing can be considered a surprise.

If ElAttrache advises Rodriguez to get season-ending surgery to remove the bone spur now, it won’t be the first time they’ve discussed it. If Rodriguez is cleared to return to the Dodgers, his rehab (four appearances, four scoreless innings) predicted a smooth return. Either outcome seems possible.

As for Baez, here’s what Mattingly said about the right-hander today: