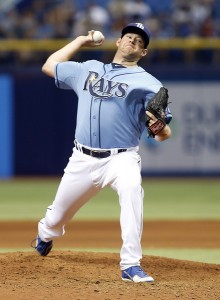 Chris Reed had already made a name for himself in California before the Dodgers drafted the left-handed pitcher 16th overall in 2011. He was a star at Cleveland High School in Reseda, then at Stanford University.

Being a first-round draft pick always comes with pressure. In Reed’s case, 11 of the 15 players drafted ahead of him have reached the major leagues. That list includes Gerrit Cole, Anthony Rendon, George Springer and Jose Fernandez. Among those the Dodgers passed on: Joe Panik, Kolten Wong and Mookie Betts. These are the players Reed will inevitably be compared to, fairly or unfairly.

On Friday the Dodgers designated Reed for assignment and claimed pitcher Preston Guilmet off waivers from the Tampa Bay Rays.

Reed spent his first four years in the Dodgers’ system as a starter. This year, he’d been used exclusively out of the bullpen at Double-A Tulsa and Triple-A Oklahoma City.

Since Reed was demoted to Tulsa on May 27, opponents were hitting .340 off him in 10 games out of the bullpen. He’d walked 13 batters in 12 innings and struck out two.

Guilmet, while unknown, appears much closer to pitching in the majors than Reed. He’d appeared in three games for the Rays already this year and 13 more at Triple-A since the Rays claimed him off waivers from the Blue Jays.

In 23 games at Triple-A this year for the Jays’ and Rays’ affiliates, Guilmet had allowed six earned runs, walked nine batters and struck out 28 in 29 ⅓ innings. The scouting report on Guilmet includes a fastball in the upper 80s, a split-fingered fastball in the lower 80s, and an ability to change elevation on his pitchers with effectiveness.

Reed can now be claimed by any major-league team. He might also remain in the Dodgers organization or elect free agency.

Regardless, today’s news is a concession by the organization that Reed’s time as a prospect is up. There have been a few such concessions lately. Since 2007 (Clayton Kershaw), no Dodgers first-round draft pick has taken part in a complete major-league season.