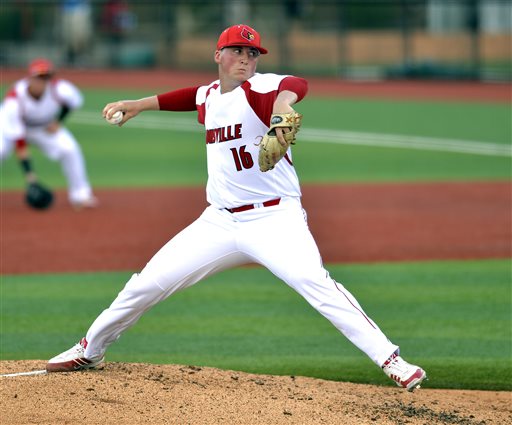 As for Funkhouser, Zaidi said the Dodgers made a “very aggressive” offer above the slot value ($1.756 million) for the 35th overall pick.

Because Funkhouser didn’t sign, the Dodgers will be compensated with the 36th overall pick in next year’s draft.

Funkhouser was advised during the process by baseball agent Scott Boras. Now he will return to Louisville for his senior season. He pitched 112 ⅓ innings for the Colonels as a junior, striking out 104 batters, walking 45 and finishing the season with a 3.20 ERA.

The Dodgers signed two other draft picks ahead of the Friday deadline: Sixth-rounder Edwin Rios, a first baseman from Florida International, and 30th-round pick Logan Crouse, a high school pitcher from Florida.

Funkhouser is the only one of the Dodgers’ first 10 picks who didn’t sign. Four of the signees are college pitchers.

“I think we have a generally conservative approach with college pitchers,” Zaidi said. “Particularly guys that pitch deep into the season — not just Walker, but (Philip) Pfeifer and (Josh) Sborz as well, who we signed last week. So we’re going to be very conservative with those guys, not just in terms of their total inning workload but even individual outings I think we’ll probably limit both their pitch and inning count.

“It’s just a way to add on a few more innings so they have an even broader launching point going into 2016. We don’t want to do anything that’s going to put on any added strain after the long college season.”