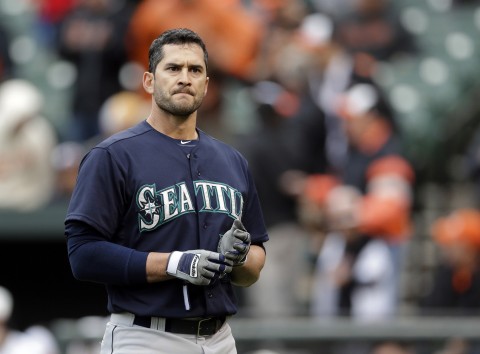 Monday, Justin Ruggiano was pulled from the third inning of his game with the Seattle Mariners’ Triple-A affiliate and informed he’d been traded.


Today he’s in the Dodgers’ starting lineup against Madison Bumgarner and the San Francisco Giants.

Ruggiano was the most intriguing name of the four added to the Dodgers’ active roster Tuesday, when all teams were allowed to expand their rosters beyond the usual 25. Pitchers Ian Thomas, Mike Bolsinger and Joe Wieland were the others.

Thomas, Wieland and Bolsinger are all listed as being available out of the Dodgers’ bullpen tonight. So is Joel Peralta, who hasn’t pitched since Aug. 9 because of a nerve issue in his neck.

Bolsinger took batting practice with the Dodgers’ starting pitchers and is the most likely pitcher to take a turn starting at least once through the starting rotation in September.

“We want him to hit,” Dodgers manager Don Mattingly said. “We want to keep all our options available.”

For Ruggiano, the timing of the trade was fortuitous. The Dodgers used all their position players Monday in a 14-inning, 5-4 win over the Giants. Jose Peraza, who bats right-handed, might have been a candidate to play the outfield today. But Peraza finished Monday’s game in center field, and Mattingly didn’t want to start left-handed hitters Carl Crawford or Andre Ethier against Bumgarner, who throws left-handed.

So, Ruggiano will play left field and bat sixth.

“I was drafted by this team,” Ruggiano said. “To come full circle and be back here is exciting for me.”

The Dodgers drafted Ruggiano out of Texas A&M in 2004 and he reached as high as Double-A before being traded to the Tampa Bay Rays in 2006, as the player to be named later in a trade that brought Toby Hall and Mark Hendrickson to Los Angeles and Dioner Navarro to Tampa Bay.

“It’s been many years since I’ve been here since this team,” Ruggiano said. “I’ve gone through a lot. I was with (Dodgers president of baseball operations Andrew) Friedman in Tampa back in our playoff run. Since then I haven’t been a part of one, so to be here and a part of it again is exciting.”

To make room for Ruggiano on the roster, the Dodgers placed right-handed reliever Josh Ravin on the 60-day disabled list. Ravin hadn’t pitched at any level since July because of a hernia issue and his season is over.