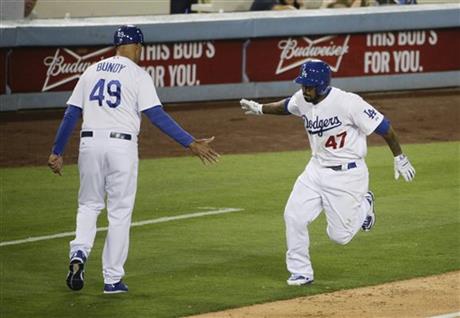 SAN DIEGO — Dodgers second baseman Howie Kendrick, who’s been on the disabled list since Aug. 10 because of a strained left hamstring, will attempt to run the bases at full speed tomorrow in Arizona. So far, Kendrick hasn’t been able to clear that important hurdle.

However, if Kendrick can run at full speed, a minor-league rehab stint would follow, Dodgers manager Don Mattingly said.

“We haven’t gotten to the point of talking about where he’s going to play, or how many, any of that,” Mattingly said.

In one scenario, Kendrick could get into some Pacific Coast League playoff games for Triple-A Oklahoma City. The OKC Dodgers begin a five-game series against Round Rock on Sept. 9.

Regardless, Kendrick appears close to playing games somewhere. Chase Utley has been the Dodgers’ primary second baseman in the meantime, starting 10 of the last 12 games, while Jose Peraza has started the other two. Those two are batting .250 (10-for-52) with seven extra-base hits in Kendrick’s absence.