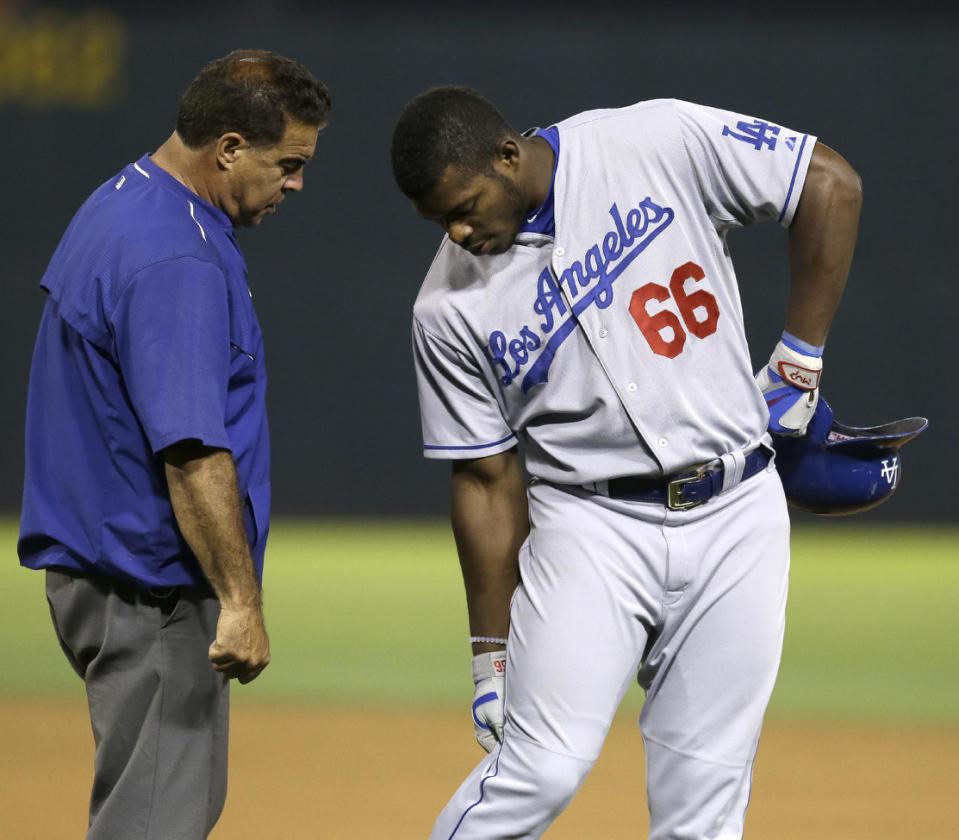 SAN FRANCISCO — Yasiel Puig is running at full speed at the Dodgers’ instructional league facility, a “miraculous” development in the outfielder’s previously plodding progress from a hamstring strain.

“Like three days ago he was running at 80 percent and having pain,” manager Don Mattingly said. “And then all of a sudden he’s going 100 percent and feels fine. It’s been a nice little surprise.”

Puig is running curved lines as well as straight lines.

“It’s been pretty miraculous, actually, for me,” Mattingly said. “Howie (Kendrick, who missed most of September with a strained hamstring) was at 80 to 90 and it stayed at 90 for like 10 days. Yas was able to go from 80 to almost 100. That’s almost legendary.”

The manager said the Dodgers’ staff hasn’t discussed Puig’s availability for the playoffs yet, but Puig has been able to do some work on defense in Glendale, Arizona. The next major step would be for him to regain his timing against major-league pitching.

One realistic scenario: Brett Anderson, who will make his final start of the regular season today, is expected to pitch a simulated game during the Dodgers’ four-day break following their final regular season game Sunday. Puig could return during that time period to face Anderson and gauge his readiness.

“We’re just getting there, moving forward from our end of it,” Mattingly said.

Puig is slashing .256/.324/.440 in 77 games this season. He’s made two separate trips to the disabled list because of hamstring strains.

“This year’s been — we’ve talked about it with a number of guys — when you have injuries you never really get into a rhythm,” Mattingly said. “The guy that’s able to go out there, like Adrian (Gonzalez), 140 to 150 times, there’s always a rhythm to that. The guy who plays 20, hurt, 15, hurt, it’s hard to get any rhythm. That’s really Yasiel’s season in a capsule. I don’t really feel like he’s gotten into any kind of rhythm this year where he’s just playing baseball.”

The Dodgers have used a fairly consistent outfield rotation in September. Justin Ruggiano (against left-handed pitchers) and Carl Crawford (against right-handers) have gotten the lion’s share of starts in left field. Kiké Hernandez and Joc Pederson have split duties in center. Andre Ethier (against righties) and either Scott Van Slyke or Chris Heisey (against lefties) have been the right fielders.

Adding Puig to the mix in right field could disrupt a roster that must be trimmed from 37 to 25 in time for the playoffs.

It’s an interesting (and potentially good) problem to have, and it’s one that seemed unlikely to present itself as recently as a few days ago.

“You concern yourself with all the guys, what anybody affects,” Mattingly said. “When you talk about setting your roster for the postseason, that affects guys. Your buddy may not be on it. A guy who’s been on (the active roster) the whole year may not be on it because you set it up differently. Anytime you set your roster, there’s some type of effect. Personally, I pay attention to it a lot because I feel it affects the dynamic of your clubhouse.

“Sometimes you can’t put a number on it. You can’t quantify it in any way. As a person that’s been in the clubhouse your whole career, you understand there is a dynamic there, what affects guys.”