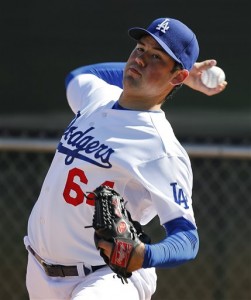 Verdugo, 19, opened the season at Single-A Great Lakes and ended it at High-A Rancho Cucamonga.

Both players will be at Dodger Stadium on Friday to receive their award prior to the 7:10 p.m. game against the San Diego Padres. Here’s more from a Dodgers press release:

The Texas native made two stints with Los Angeles this season, including his Major League debut with his first career start against the New York Mets on July 25. Lee was selected with the 28th overall pick in the 2010 First-Year Player Draft out of McKinney (Texas) High School.

The Arizona native batted .311 (159-for-512) with 32 doubles, four triples, nine home runs and 61 RBI along with a .340 OBP and a .441 SLG in 124 combined games for the Loons and the Quakes. He was also exceptional in both levels with runners in scoring position, batting a combined .316 (37-for-117) with eight doubles and a triple. Verdugo was selected by the Dodgers in the second round of the 2014 First-Year Player Draft out of Sahuaro High School in Arizona.

Branch Rickey Minor League Player and Pitcher of the Year: 1989-2015