The Arizona Diamondbacks promoted Gibson from bench coach to manager in July 2010, when then-GM (and current Dodgers executive) Josh Byrnes was fired along with manager A.J. Hinch.

Dave Stewart (who coincidentally started Game 1 of the 1988 World Series for the A’s) fired Gibson when he took over as the Diamondbacks’ general manager last year.

Now, Gibson might be the longest of longshots in a group of candidates that includes Geren, Gabe Kapler, Tim Wallach, Ron Roenicke, Dave Roberts, Bud Black and Darin Erstad.

In April of this year, Gibson was diagnosed with Parkinson’s disease, an incurable disorder affecting the nervous system. A recent report on BleacherReport.com chronicled Gibson’s recovery and painted an optimistic picture. Former Diamondbacks general manager Kevin Towers is quoted in the piece as saying “I think he’d love to manage again. In the right situation, I think he’d be a bench coach.”

If health is not an issue — this interview can only mean good things about Gibson’s health — his experience might be. In Arizona, he worked with one of baseball’s smallest analytics departments; in Los Angeles, he would have one of the largest. Gibson’s approach might be more open-minded this time around, though “open minded” hasn’t characterized his approach as a player or manager to this point .

The Dodgers have said they’re seeking a manager well-equipped to teach a younger roster. Gibson has never managed at the minor-league level.

Geren, 54, had some of baseball’s youngest teams when he managed the Oakland A’s from 2007-11. He was promoted from the minors to be the A’s bullpen coach from 2003-05 and their bench coach in 2006, working under current Dodgers general manager Farhan Zaidi. Geren was also the best man at general manager Billy Beane‘s wedding, lending further credibility to his knowledge of analytics.

However, Geren never managed a winning team in Oakland and came under heavy criticism for his lack of communication skills. Former A’s (and current Angels) closer Huston Street once called Geren “my least favorite person I have ever encountered in sports from age 6 to 27.”

For different reasons, then, Gibson and Geren are stronger candidates to be the Dodgers’ next bench coach — particularly if the next manager doesn’t have any major league managing experience (Kapler, Roberts, Erstad, Wallach).

Wallach has an invitation to be Don Mattingly’s bench coach in Miami — assuming he doesn’t get the manager’s job in Los Angeles. No word on that yet. At the moment, the Dodgers don’t have any coaches under contract for next year. If some of the managerial candidates are also being considered for other positions behind the scenes, that could explain the sprawling nature of the search so far.

A more accurate vision of Gibson’s next appearance in a Dodger uniform might begin here — in the background, not as the center of attention: 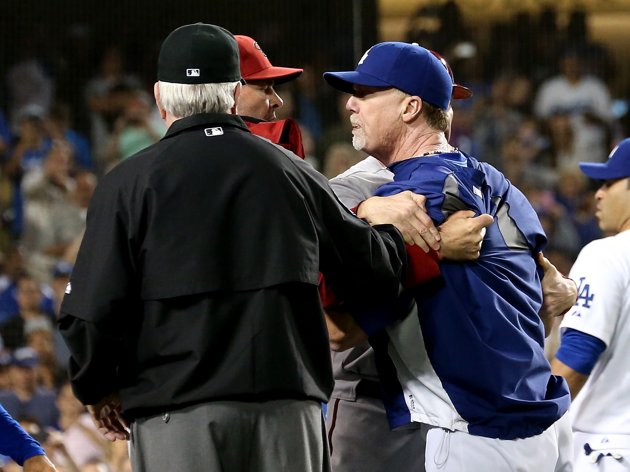 Kirk Gibson and Mark McGwire tussled during a benches-clearing brawl between the Diamondbacks and Dodgers in July 2011. (Getty Images)

Update (4 p.m.): Dusty Baker is reportedly getting $4 million over the next two seasons to manage the Washington Nationals, plus an additional $3 million in possible incentives. Black earlier rejected a one-year offer worth less money from Washington.

Though it has little bearing on the Dodgers’ search, note for the record that the Padres reportedly did not interview Roberts, who was their bench coach the past two seasons, before hiring Andy Green.