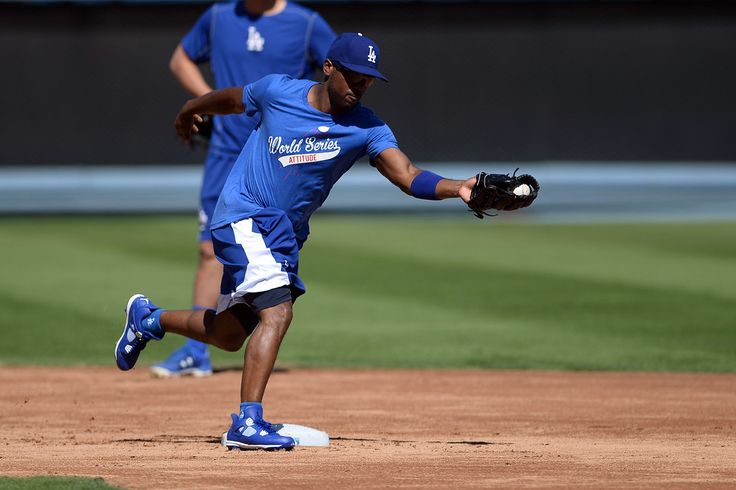 For most of the 2015 season, this was Jimmy Rollins and Corey Seager. One in the foreground, the other invisibly waiting in the wings. (Hans Gutknecht/Staff photographer)

This is Part 44 of a series in which every member of the 2015 Dodgers has his season juxtaposed with an episode of the greatest sitcom of all-time. Don’t take it too seriously.

Key quote: “It’s my day off, but I take care of you anyway because you’re my favorite customer. You’ve been with me for so long. You’re so loyal.”

Rollins and Seager’s fates were intertwined from the moment Rollins became a Dodger.

Seager, 20, is the Dodgers’ shortstop of the future. When the year began, he got his largest taste of major league spring training. He reached base in half of his 18 Cactus League plate appearances, drove in four runs and scored five — a taste of things to come — and began the season in Double-A. By May, Seager was in Triple-A.

Rollins, the 36-year-old veteran acquired from the Philadelphia Phillies the previous December, began the season as the starting shortstop and leadoff hitter, but was hitting below .200 as late as June 20.

All that momentum set a predictable trajectory in motion: Rollins would be allowed to hold down the shortstop position until Seager was ready. In September, rosters expanded to 40 and Seager was ready.

By then, Rollins had established who he was in the late autumn of his 16-year career: A dangerous hitter right-handed, a fairly easy out left-handed (.270 OBP), a sure-handed fielder within his range (with limited range), and a valuable clubhouse presence. Seager? He was on the cover of Baseball America’s September edition, which declared 2015 the “Year of the Prospect.” There were no other prospects pictured on the cover.

On Sept. 29, Don Mattingly made it official, pulling Rollins aside to tell him that Seager would be the Dodgers’ primary shortstop going into October. I made a Wally Pipp comparison at the time, because that’s what those moments are made for, except that Pipp went into a slump when Lou Gehrig replaced him in 1925. Rollins wasn’t in a slump during Seager’s September ascent. He was on the bench nursing an injured right index finger.

Catalyzed by an injury, Rollins’ role had finally reversed. Seager was the starting shortstop in Game 1 of the National League Division Series — batting third no less, against Jacob deGrom. Seager would bat 17 times in the series and strike out eight times. He batted .188 (two singles, one double and a walk).

Rollins batted seven times in the series and finished with one single.

In “The Barber,” Jerry tries to avoid his barber, Enzo, because of haircuts like this one:

Enzo’s younger nephew, Gino, works in the same barber shop but gives much better haircuts. It becomes a tricky dance for Jerry, seeing Gino behind the jealous Enzo’s back. He only avoids death at the hands of a jealous barber because of the movie “Edward Scissorhands.”