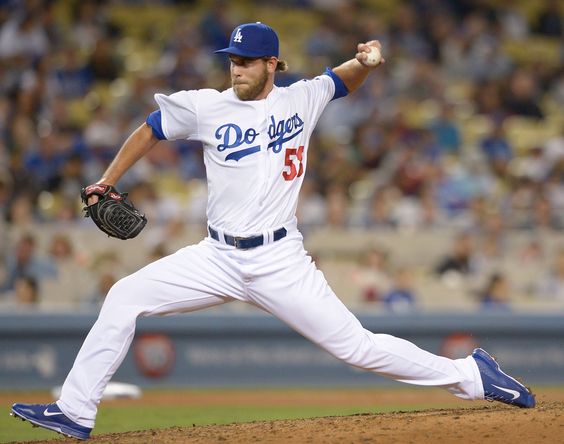 The Dodgers acquired pitcher Ian Thomas from the Atlanta Braves on May 27. (John McCoy/Staff photographer)

This is Part 48 of a series in which every member of the 2015 Dodgers has his season juxtaposed with an episode of the greatest sitcom of all-time. Don’t take it too seriously.

Ian Thomas has an interesting back story as Major League Baseball players go. He went undrafted out of Virgina Commonwealth University, where his 4.25 ERA as a 22-year-old senior led the staff. (The Rams finished 10th in the 11-team Colonial Athletic Association in 2009, which certainly didn’t help Thomas’ draft exposure.)

To his credit Thomas stuck with pitching, first for the Winnipeg Goldeyes (in the independent Northern League), then for the York Revolution (in the independent Atlantic League). Three years after his final college game at age 25, he signed a free agent contract with the Atlanta Braves. Within two years of signing, Thomas had pitched at every level of the minor-league ladder and reached the majors. To put it mildly, this isn’t the typical career trajectory of a major league pitcher.

The Atlanta Braves didn’t like Thomas as a starting pitcher, but Andrew Friedman did when he nabbed the unheralded pitcher as a throw-in to the Juan Uribe/Alberto Callaspo trade. Thomas started a bunch of games at Triple-A Oklahoma City; some went well and some didn’t. He would be called up to the majors three separate times — actually four; he might have missed out on appearing in a game in Chicago by virtue of a bizarre airport mishap.

Thomas’ most memorable appearance in a Dodger uniform: A July 24 start against the Mets at Citi Field. Thomas allowed one run in five innings, got the win, and effectively ensured a split of a 10-game road trip to begin the second half. That was his only start in a Dodger uniform all year.

It was after this game that Thomas acknowledged the elephant in the room: He looks a like Clayton Kershaw. Kind of a lot. “I’ve been called Clayton a few times so far,” Thomas said. “I guess it’s the scruff and the hair a little bit, but far away from what he’s been doing. Trying to catch up to him is gonna be a long road.”

Can you say “bizarro Kershaw?”

There’s a Bizarro World episode of Seinfeld, too. It features a bizarro Jerry, bizarro George and bizarro Kramer; only Elaine successfully navigates the two worlds without destroying the fabric of space-time. See for yourself: