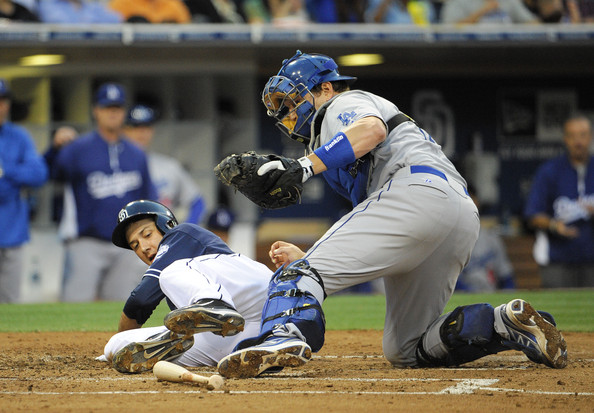 Dodgers catcher A.J. Ellis is working to improve how he receives pitches around the bottom of the strike zone. (Getty Images)

GLENDALE, Ariz. — A.J. Ellis answered a lot of questions about pitch framing when spring training commenced last year. He’d lost 111 calls on balls that “should have been” strikes in 2014, according to Pitch F/X data on the website StatCorner.com. Now, Ellis had a general manager who had heard of StatCorner.com.

Ellis said he isn’t doing anything new framing-wise this year but he did work with same coach over the winter, “trying to improve, make better angles.”

“The bottom of the strike zone has always been the area where I tend to lose more calls than the elite guys,” Ellis said. “That’s obviously an area we’re trying to focus on. That’s where you want your pitchers to focus the ball.”

Ellis has the benefit of framing data provided to him by the Dodgers’ coaching staff. This is proprietary data belonging to the team — not anything you can look up on the internet, at least not exactly — but I think I know what he’s talking about. If you watch Ellis receive a low pitch, he has a nasty habit of “stabbing” at the baseball with his glove; that’s how it’s been described to me in the past. When a catcher stabs at the baseball, he’s less likely to get that pitch called a strike if it’s on the borderline.

Ellis is trying to get rid of this habit, so he welcomes the data.

“They’re able to not just give you framing metrics, but which pitch, what type of pitch, who the pitcher is,” he said. “It’s encouraging that according to them I did get better last year. I’m still not where I need to be.”