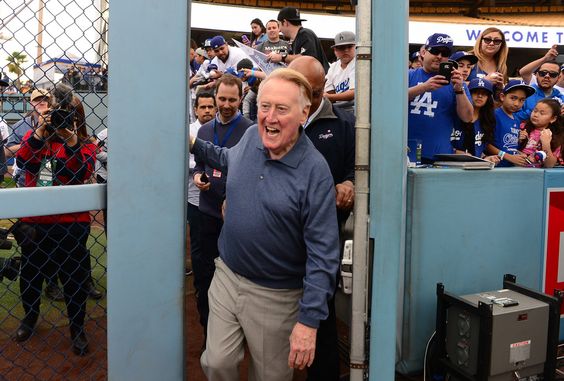 Hall of Fame broadcaster Vin Scully smiles as he makes his way to the stage during the Dodgers’ fourth annual FanFest in January. (Keith Birmingham/Staff photographer)

Most Dodger fans might be able to watch Vin Scully’s final season on their home televisions this year after all.

Time Warner Cable, the provider of SportsNet LA for most of Southern California, took a significant step in its long-stalled negotiations by lowering its asking rate for the exclusive TV home of the Dodgers.

“Fans want to see Vin Scully’s last season, so we made a special offer of 30 percent off our current rate to encourage AT&T/DIRECTV to do what’s right for the fans and to start negotiating with us in good faith on a longer term deal,” TWC spokesperson Andrew Fegyveresi said via email.

DirecTV did not reply immediately to an email seeking comment Tuesday night.

Scully, the 88-year-old Hall of Fame broadcaster, has said the 2016 season will be his last in the broadcast booth. He began his career with the Dodgers in 1950.

Scully is planning to be in the booth this Friday for a Cactus League game against the San Francisco Giants, and again on April 4 when the Dodgers visit the San Diego Padres on Opening Day.

Both of those dates are too soon for Time Warner to guarantee full carriage of SportsNet LA.

“We’ve had discussions with several providers, but we don’t expect any other distributors to carry SNLA by Opening Day,” Fegyveresi said via email. “Especially given that it’s Vin Scully’s last season, if fans want to see SportsNet LA and Dodgers games, they need to switch to Time Warner Cable, Charter or Bright House Networks.”

Dodger fans who do not subscribe to Time Warner have had three years to grow accustomed to blackouts of virtually every regular-season game not televised on ESPN.