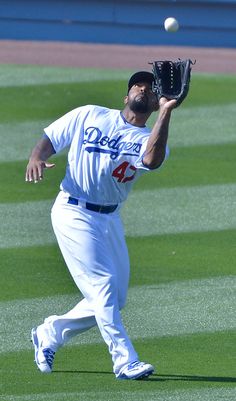 Howie Kendrick hadn’t played left field in a game since 2013 before this month. (John McCoy/Staff photographer)

DENVER — The left field foul pole at Coors Field sits 347 feet down the line. Only Wrigley Field’s is farther from home plate among National League parks.

The outfield wall then just out at a steep angle to a power alley that sits 390 feet from home. It’s much bigger than right field here and bigger than almost any other left field in baseball. Here’s a nifty page for making park-to-park comparisons. Take a few minutes to check it out. I’ll wait right here.

The man responsible for patrolling left field today is Howie Kendrick, a second baseman by trade. Manager Dave Roberts has professed confidence in Kendrick every step of the way since Carl Crawford and Scott Van Slyke went on the disabled list, and Friday was no different.

“There’s no panic,” Roberts said. “He’s going out there and preparing. He’s played left field before in the big leagues. I trust the player. I expect him to make plays and be good out there.”

Kendrick hasn’t committed an error since shifting to left field. His play has done the talking for him. But Coors is a different challenge, and any error or bad route or other miscue here will warrant a question after the fact.

“I think that for any outfielder, this is probably the biggest challenge,” Roberts said. “It’s a tough outfield to play. It’s big. There’s a lot of grass out there. We’re going to play him deeper. Just go out there and make the plays he’s supposed to make.”

Kendrick isn’t the Dodgers’ everyday left fielder until Van Slyke and Crawford return. At least, Roberts wasn’t willing to admit that’s the case. But Chase Utley (.302/.373/.415) has been difficult to take out of the lineup, and second base is his best position by far. And the Dodgers need a left fielder.

Kendrick has been struggling at the plate (.179/.207/.179), but Roberts is willing to let him work that out at a mostly unfamiliar position. That will probably continue, especially if Kendrick continues to thrive in one of the toughest parks a left fielder can face.