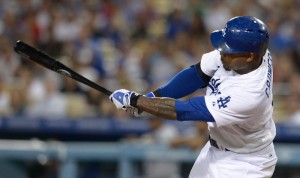 Carl Crawford has spent 16 days on the disabled list this year with a back injury after missing 75 games last year with an oblique injury. (John McCoy/Staff photographer)

The Dodgers activated Carl Crawford from the 15-day disabled list on Tuesday. He’s starting in left field and batting seventh against the Miami Marlins, who will send right-handed pitcher Tom Koehler to the mound. Crawford has never faced Koehler in his career.


Crawford played five games at the beginning of the season before he was sidelined with a sore lower back. Even then, he never played a full nine innings in any game, and Dodgers manager Dave Roberts hinted Tuesday that pattern will continue.

“We’ve seen there’s a propensity to get injured,” Roberts said. “Even in the beginning of the season you saw I took him out even to get him off his feet. The idea of running him out there until he breaks is not something I believe in. I just try to kind of conserve as much as possible and just use that depth.”

Dodger left fielders are hitting .235 without Crawford. That number is propped up by Kiké Hernandez‘s .310 average, compiled almost entirely against left-handed pitchers. Howie Kendrick has struggled at the plate this season, batting .159, and is not in the starting lineup today with Crawford back.

Lee did not appear in a game during his three days in the majors.

Crawford made three rehab appearances with Oklahoma City and Single-A Rancho Cucamonga, combining to hit .364 (4-for-11) with two doubles and three RBI, last playing Sunday for the Quakes.