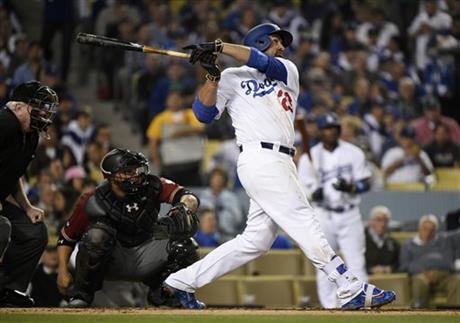 The Dodgers dodged a bullet when Adrian Gonzalez told manager Dave Roberts he was feeling better one day after he left Monday’s game against the Angels with lower back tightness.

Gonzalez still hasn’t spoken to reporters since he left the stadium last night. He wasn’t seen in the clubhouse or on the field for pregame activities Tuesday. But Roberts said he was hopeful that Gonzalez would be able to pinch hit tonight, though he would not be available to play the field. Howie Kendrick is starting at first base instead.

Roberts said that the Dodgers aren’t considering placing Gonzalez on the disabled list at the moment and it’s possible he could play tomorrow in Anaheim.

Gonzalez, 34, is the only Dodger who’s appeared in all 39 games this season. He’s batting .282 with four home runs and 20 RBIs, tied for the team lead.