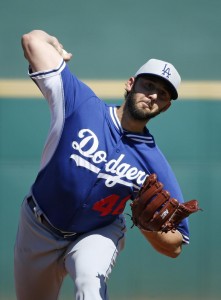 Mike Bolsinger made 21 starts for the Dodgers last year, going 6-6 with a 3.62 ERA. He will reportedly start Wednesday in Anaheim. (Associated Press photo)

The Dodgers have recalled Mike Bolsinger from Triple-A Oklahoma City, and the pitcher will reportedly start Wednesday’s game in Anaheim.

“We’re optimistic he’ll get us for sure through five” innings, Roberts said. “Every starter will get an extra day.”

The Dodgers are in the midst of 20 straight games without a day off. The Dodgers’ pitching staff was further taxed when Kenta Maeda threw a season-low four innings in a 7-6 loss to the Angels on Monday night. Roberts said that Bolsinger could possible remain in a bullpen role.

Roberts added that Bolsinger will be on an 80-pitch limit. The right-hander will throw a light bullpen session today.

Bolsinger’s recall is not yet official and the corresponding move on the 25-man roster hasn’t been announced; the Dodgers will almost certainly wait until the conclusion of tonight’s game to determine that. First baseman Adrian Gonzalez left last night’s game after five innings with a back injury and isn’t in the lineup today, but Roberts said he is not under consideration to go on the disabled list.

Ross Stripling will start Thursday in Anaheim and, if the rotation order holds, Scott Kazmir would then start the series opener in San Diego on Friday.

Bolsinger made two starts for Oklahoma City after he began the season rehabbing an oblique/abdominal injury. He allowed two runs in eight innings over the two games and was scheduled to start again today.