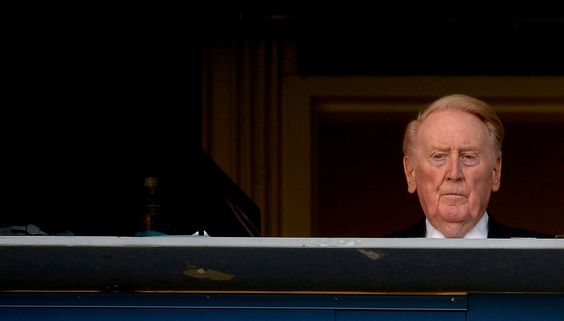 Vin Scully recently turned down a formal offer to be part of Fox’s broadcast of the All-Star Game in San Diego in July, SportsIllustrated.com reported today.

Brad Zager, an executive vice president of production and operations for Fox Sports, spoke with Scully at Dodgers [sic] Stadium on May 17 at [sic] prior to the Freeway Series game that night against the Angels. Zager has known Scully for more than a decade, having worked as his producer from 2004 to 2012 for both Prime Ticket and KCAL-TV’s coverage of the Dodgers. On behalf of his network, Zager told Scully that Fox Sports would accommodate him however he wished, whether that was calling one inning, the entire game or even being a guest in the booth. “I told him, ‘Look, everyone would love to have you as part of the All Star Game,’” Zager said. “Anything you would want to do, we will make it happen.”

Scully was very appreciative, according to Zager, but he declined the invitation

To be fair, the news should come as no surprise.

Back in March, when Scully called his only spring training game in Arizona, I asked Scully specifically if he’d be interested in being part of the All-Star Game in any capacity. Here was his response:

“No. None whatsoever. There have been a lot of the netowkrs who have been very nice, asking me to do an inning or two, and I don’t belong there. When I did Game of the Week, we had worked every week together. Now I don’t do it. Fox for instance, they’ve been great all the time. ‘Come on in, do the game.’ Joe (Buck), Jack’s son, said ‘do the whole game.’ No, no, no. I don’t belong there. I belong in Dodger Stadium in the booth, and that’s where I belong. That’s where I’ve lived. That’s where I’ll stay until it’s over. No, quote, guest appearances.”