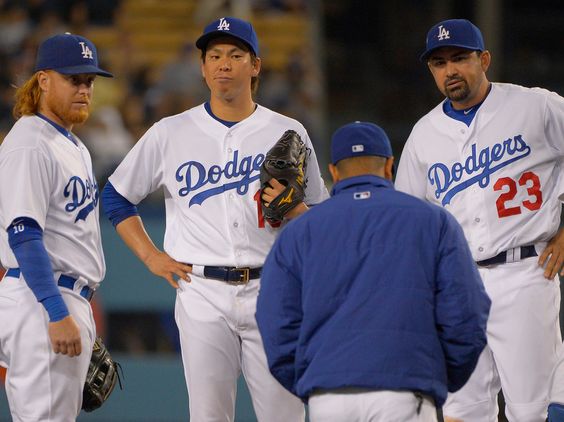 Kenta Maeda looks at Dodgers manager Dave Roberts as he comes out to the mound int he seventh inning. (John McCoy/Staff photographer)

Kenta Maeda was great for 6 ⅔ innings Wednesday against the Colorado Rockies. Dave Roberts visited the mound in the seventh inning and left Maeda in to face Daniel Descalso, who promptly drove in the only run in a 1-0 Dodgers loss. The box score is here. The photo gallery is here.

Julio Urias‘s next start will be Sunday against the San Francisco Giants, a national telecast. Alex Guerrero is a free agent.

The Dodgers have a chance to draft Kyle Funkhouser for the second consecutive year.

The Rockies had two first basemen at one point in the game, and the wrong one caught the ball when Maeda dropped a bunt to third baseman Nolan Arenado: