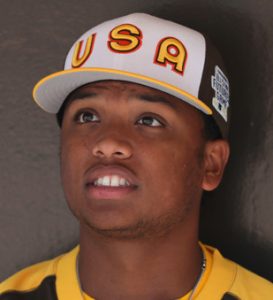 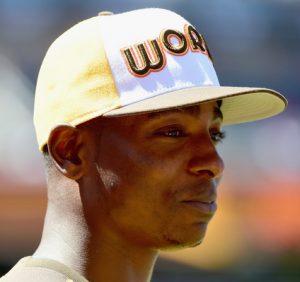 SAN DIEGO — Willie Calhoun and Jharel Cotton got a jersey, a hat, a break from the summer Oklahoma humidity and the memory of a lifetime Sunday.

Calhoun, a second baseman at Double-A Tulsa, and Cotton, a pitcher at Triple-A Oklahoma City, were the only two participants in the Futures Game at Petco Park from the Dodgers’ organization. Calhoun went 0-for-2 in two plate appearances, and Cotton threw three pitches. But there was more to it than that.

Cotton retired the only batter he faced in the seventh inning, Dylan Cousins, on an improbable catch by right fielder Eloy Jimenez in foul territory:

“I thought I was going to go back out for the eighth inning,” Cotton said. “The plan was, if we go ahead, they’re going to bring someone else in. I went out (to the mound) because they didn’t tell me anything. … They called me back. Someone was coming in. I thought that was pretty funny.”

Calhoun entered the game in the sixth inning as a defensive replacement at second base. He flew out to the right-center field warning track in his first plate appearance, against Ricardo Pinto. He later grounded out against Dovydas Neverauskas to end the eighth inning.

It wasn’t a great game on paper for Calhoun, who family came down from Northern California for the occasion, but his mood didn’t show it.

“This is the best baseball experience I’ve had in my life,” he said. “Just being able to compete with everyone is really cool.