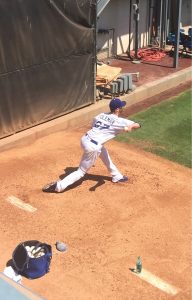 Coleman ranks second on the club with 50 relief appearances this year, going 2-1 with a 3.70 ERA.

Liberatore has a 2-0 record in 44 appearances this season. He ranks third among NL relievers with a 1.62 ERA.

Toles made his Major League debut on July 8 and posted a .316 batting average with three doubles and an RBI in 16 games.

Urías, 19, last pitched on Sunday at Colorado Springs, striking out two in a scoreless inning of relief and is 5-1 with a 1.40 ERA in 11 games (seven starts) with Triple-A Oklahoma City this year. His last big-league appearance was July 21 at Washington, when he allowed one run on five hits in a 4.0-inning start (77 pitches, no-decision), and he’s posted a 1-2 record with a 4.69 ERA in nine big-league starts with the Dodgers this year.