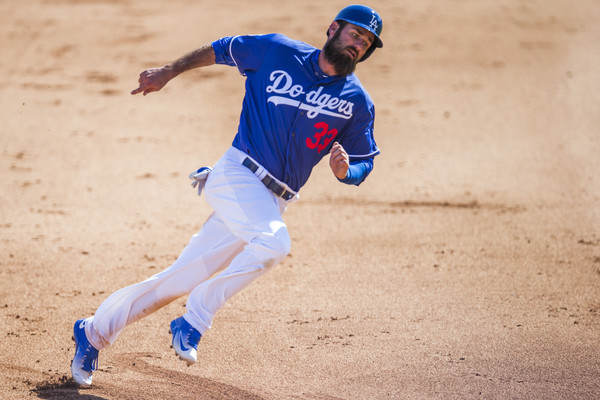 The Dodgers placed Scott Van Slyke on the 15-day disabled list Tuesday with what the team called inflammation in his right wrist. The first baseman/outfielder said this injury is related to the wrist injury that bothered him last season.

Chris Taylor was recalled from Triple-A Oklahoma City to take the roster spot of Van Slyke, who is batting .225 in 52 games this season.

The more Van Slyke spoke of his latest injury, the more trivial the DL record seemed.

“I’ve never not noticed it,” he said. “Since last year, I know I’ve lost range of motion. I’ve known it wasn’t normal.”

Van Slyke said he was told to take a week to 10 days to rest his wrist. If he doesn’t feel better at that point, surgery would be an option. The procedure would be an “arthroscopic, run-of-the-mill clean-up,” but it would likely end his season.

“The goal is to find a scenario where I’m not completely shut down but can still help the team in certain capacities,” Van Slyke said.

Now in his fifth major league season, Van Slyke hasn’t been able to help the team at the plate much lately, by his own admission. The limited range of motion in his wrist has contributed to that.

If surgery is the recommended course of action, Van Slyke said he would prefer not to wait.

“You don’t want to wait until November or December because then you’re short on time going into spring training” next season, he said.

Taylor was optioned to Triple-A on Friday to make room for infielder/outfielder Rob Segedin. He was hitting .229 in 24 games this season with the Dodgers since being acquired from the Seattle Mariners for pitcher Zach Lee.