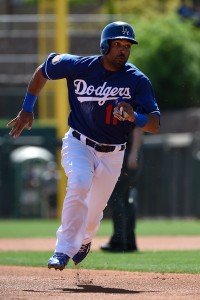 The Dodgers will activate second baseman/outfielder Micah Johnson for tonight’s game against the San Francisco Giants, bringing the number of players on their active roster to 36.

Johnson had a productive postseason at the plate and on the bases for Triple-A Oklahoma City. In nine Pacific Coast League playoff games, he batted .375 (15 for 40), scored 10 runs, and went 8 for 9 in stolen base attempts. The 25-year-old slashed .261/.321/.356 in the regular season at Triple-A. He appeared in two major league games in his first season as a Dodger, going 0 for 3.

Dodgers manager Dave Roberts talked about using Johnson “off the bench for a speed guy that can steal a base, maybe a bat off the bench.”

Johnson saw time at second base, center field, left field and third base (in that order) at Triple-A.

Roberts made no mention of infielder Chris Taylor, the only other player on the Dodgers’ 40-man roster who isn’t with the team. Pitchers Brandon McCarthy, Scott Kazmir and Brett Anderson are on the 15-day disabled list and therefore inactive.