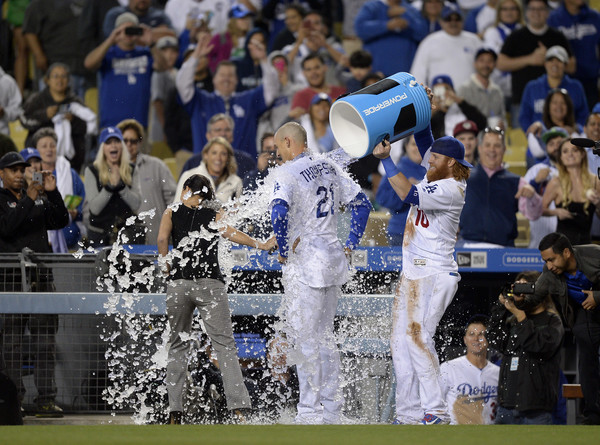 Dodgers outfielder Trayce Thompson hasn’t been told that his season is over. Yet every time he meets with a doctor to discuss his recovery from fractures in his back, he feels it.

“They pretty much have said it without saying it, you know?” Thompson said Monday. “They talk about next year and the timetable, stuff like that. They know how bad I want to play. They know how frustrating it is to have to watch. It’s kind of looking that way.”

Although Thompson hasn’t had a setback in months, it appears he will ultimately run out of time to play for the Dodgers this season, regardless of how long their season goes. The 25-year-old outfielder still hasn’t been cleared to swing a bat or run on flat ground, though he said he will begin playing catch Tuesday or Wednesday.

Thompson hasn’t played since July 10. He was hitting .225 with 13 home runs at the time. Though the Dodgers are faced with the daunting task of trimming their active roster from 36 to 25 if they advance to the postseason, their dearth of right-handed hitting natural outfielders gave Thompson an opening.

These days, he said the pain in his back is gone.

“It’s more so in the leg than anything,” he said. “It’s not painful at all. It’s kind of like a funny bone feeling in the leg, in my quad-hip area.”

Thompson hasn’t played winter ball since 2013, but he wouldn’t rule out doing so again if the Dodgers asked him to. The Caribbean Leagues begin play in October.

“It’s all up to the club really,” he said. “I feel like at this stage of my career I don’t necessarily need it. I get after it pretty hard in the off-season.”