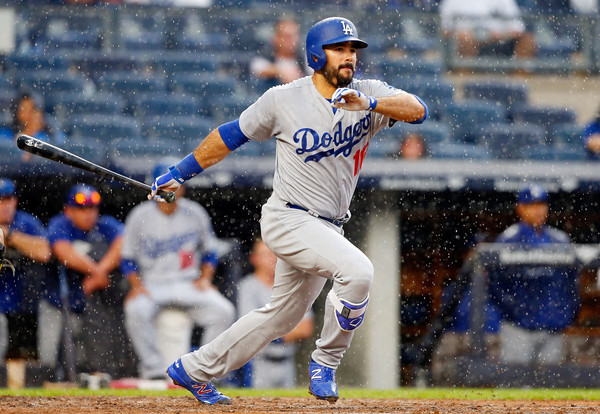 Andre Ethier could be on the bubble for a National League Division Series roster spot. (Getty Images)

SAN FRANCISCO — The Dodgers have three games left in the regular season, and manager Dave Roberts said that players are still being evaluated for possible postseason roles. It’s already gotten a little weird.

Thursday, Julio Urias started, Brett Anderson and Alex Wood relieved, and 13 different position players got into the game. Here was the defensive alignment in the ninth inning:

Things will get normal soon enough. The Dodgers must trim their active roster to 25 players after Sunday. Here’s our first guess at who will make the roster:

No surprises here, either.

Roberts already confirmed this week that Toles and Puig would be on the NLDS roster. It goes without saying that Reddick and Pederson will be there, too. The only real question mark is Ethier, who could still be on the bubble going into the weekend. Even if he makes it he won’t be a starter — that much is clear — but Ethier has taken quickly to pinch hitting against right-handers. He has three hits, one walk and two RBIs in 10 such appearances since returning from the disabled list. The Nationals have at least two right-handers in their projected rotation, plus an elite right-handed closer. If he keeps up his current pace, Ethier will be difficult to cut.

Hernandez and Kendrick are staples of every lineup Roberts has dispatched against a left-handed pitcher. The only question is where each man plays in the field.

Roberts already confirmed his starters for the first three games.

This is where it gets tough. Most of these pitchers are locks, and at least one needs to be capable of starting a possible Game 4 (or piggybacking Kershaw on short rest). However — and this is just a guess — two or three spots probably remain up for grabs. Filling those roles is like a finishing a puzzle: it’s all a matter of finding complementary pieces. Depending on how all the pieces line up, Josh Ravin, Josh Fields, Anderson or Ross Stripling might be better fits than someone else in my nonet. If Roberts wants a 10-man bullpen (which isn’t out of the question) count on one of those four making it in.

McCarthy has a chance to pitch himself onto the roster with a strong outing Friday in relief of Hill. If he picks up where he left off Sunday at Dodger Stadium, that might be enough to put him in. In turn, that would spell bad news for Stripling, who has lower upside and less experience than McCarthy. Anderson provides length to a 9-man pen, but probably hasn’t pitched well enough as a starter, or often enough as a reliever, to justify that spot.

Urias probably cemented his spot Thursday in San Diego; it seems as if his innings limit won’t be an issue for at least another round.

Howell and Wood have both been cast as left-handed specialists, but they’re diametric opposites. Howell is a soft-tosser who induces ground balls, while Wood’s been touching 94 on the radar gun as a reliever since returning from the disabled list — the better choice in strikeout situations.

Ravin and Fields had good Septembers, but lack the high-leverage experience of fellow right-handers Blanton and Baez (or the long-relief length offered by McCarthy, Stripling and Urias). (correction: Ravin is ineligible for the postseason roster because he served a PED suspension in 2016)