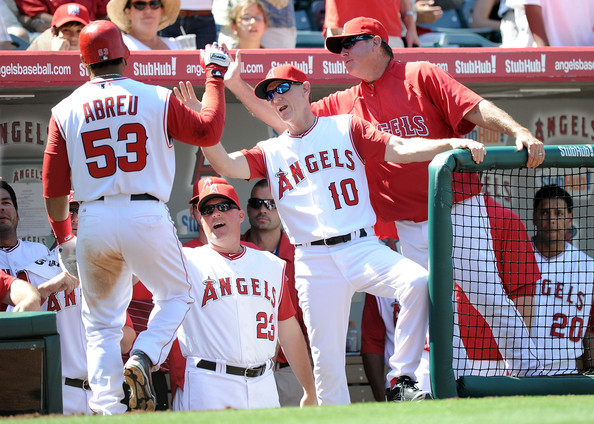 Ron Roenicke, center, was the Angels’ third base coach from 2000-05 and bench coach from 2006-10. He will reprise the role in 2016 after finishing last season on the Dodgers’ staff. (Getty Images)

Bud Black is reportedly out of the running to be the Dodgers’ next manager, and Ron Roenicke won’t remain on the coaching staff.

Black, one of three finalists to replace Don Mattingly, is no longer under consideration according to Jerry Crasnick of ESPN.com. Black, 58, managed the San Diego Padres from 2007-15. He also was a finalist for the job in Washington that ultimately went to Dusty Baker.

If Black isn’t the Dodgers’ next manager, the job will go to a first-timer — either Gabe Kapler or Dave Roberts.

END_OF_DOCUMENT_TOKEN_TO_BE_REPLACED

Update (10 p.m.): Erstad is out, and ESPN has scratched Gibson from the list on its original report.
END_OF_DOCUMENT_TOKEN_TO_BE_REPLACED

END_OF_DOCUMENT_TOKEN_TO_BE_REPLACED

Dusty Baker (right) is the front-runner to be the Washington Nationals’ next manager after negotiations ended with Bud Black (left), according to multiple reports Monday. (Associated Press photo)

A surprising bit of news leaked out of our nation’s capital today: Bud Black will not manage the Washington Nationals.

Nationals GM Mike Rizzo offered Black the managerial job last Wednesday, which he accepted, but when they entered contract negotiations, they never came close to reaching a deal.

The Nationals, according to a person with knowledge of the talks, originally offered Black a one-year deal for $1.6 million, and refused to guarantee more than two years. Black informed the Nationals’ ownership several days ago that he couldn’t accept a deal, which is considerably lower than he anticipated.

By contrast, Don Mattingly, who has less experience, just received a four-year deal for about $10 million from the Miami Marlins.

Both USA Today and CBSsports.com are reporting that Dusty Baker is now the front-runner to manage the Nationals.

Baker earned $4 million in the final year of his contract when he was fired in 2013 by the Cincinnati Reds, according to USA Today, and $3.5 million according to CBS. He was not among the front-runners to manage the Dodgers.

Black, who managed under Dodgers executive Josh Byrnes in San Diego, is a candidate to at least get an interview this month.