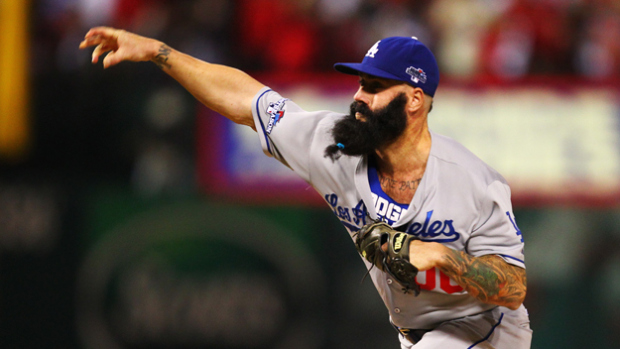 Reliever Brian Wilson re-signing with the Dodgers might constitute the biggest surprise of the off-season. (Getty Images)

Accountability matters here, so I decided to take a look back at a little list I made in October.

In it, I ranked the Dodgers’ 12 in-house free agents in order of their likelihood of re-signing. Here’s how I ranked them:

In light of Marmol’s contract with Marlins — he agreed to terms yesterday — that leaves only Capuano still unsigned among the 12 players.

Starting at the top of the list, it came as little surprise that the Dodgers re-signed Howell and Uribe. Nolasco was offered four years and $49 million from the Minnesota Twins. Since not many 31-year-old pitchers with a career history of below-average ERAs in the National League get four-year contracts from American League teams, Nolasco did the logical thing and signed the contract.

The Dodgers reached out to Punto about re-signing, but the Oakland A’s wanted him more. Billy Beane made a quick push and signed Punto for one year and a guaranteed $3.25 million. The Dodgers really didn’t have a chance to be interested in Marmol; they were more interested in Wilson and Chris Perez for set-up roles, and both pitchers accepted the Dodgers’ offers in December.

Young retired. So did Hairston. Schumaker and Ellis were swept away by better offers from a pair of NL Central teams, the Cincinnati Reds and St. Louis Cardinals, respectively.

Volquez got a one-year, $5 million contract from Pittsburgh, where he’ll compete for the fifth starter’s job on a good Pirates team. Not unexpected.

Come to think of it, as busy as it was, the off-season mostly stayed true to expectations. Clayton Kershaw re-signed. Don Mattingly got a new, longer contract. The Yankees threw a ton of money at Masahiro Tanaka.

In Uribe and Howell, the Dodgers re-signed the two players who were the best fits to re-sign. The Dodgers wanted a durable veteran to fill the number-four starter’s job on a short-term contract; Dan Haren is a durable veteran who was content with a short-term contract. Haren’s history shows less risk than that of Nolasco, who got the longer-term deal he wanted from the Twins.

Ned Colletti reached outside the organization for bullpen help from Jamey Wright and Chris Perez. Neither could be considered a real surprise: Perez replaces Ronald Belisario, who was non-tendered in his final arbitration year, and Wright becomes the long reliever the Dodgers never really had in 2013.

Even though the final bill hasn’t come in yet, the cost of building the Dodgers’ bullpen is already staggering. Together, Dodger relievers will earn roughly $26 million in actual salary in 2014. That doesn’t include deferred signing bonus payments, salaries for players with 0-3 years’ service time (such as Paco Rodriguez, Chris Withrow and Jose Dominguez), or the actual closer — Kenley Jansen, who has yet to re-sign. That’s an eye-popping number.

The biggest individual surprise might be Wilson, who drew interest from the Yankees and Tigers — two teams that expect to contend in 2014 — to be their closer. Instead, he chose to be baseball’s highest-paid eighth-inning man in Los Angeles for $10 million and a player option for 2015.

For a team that reached the NLCS in 2013, no major changes were needed. We got none.

Some bullet points for a Grenadian Independence Day:

END_OF_DOCUMENT_TOKEN_TO_BE_REPLACED 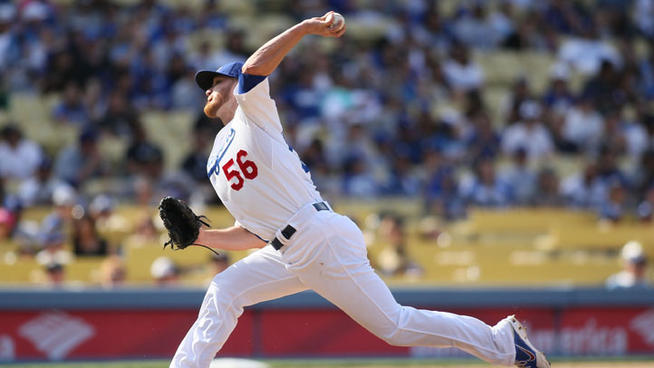 For a left-handed set-up man like J.P. Howell the market has pretty much been set. Right?

Javier Lopez got three years and $13 million from the San Francisco Giants.

On Friday, Boone Logan got three years and $16.5 million from the Colorado Rockies.

Howell was just a nudge better than those two in 2013 while doing essentially the same task, retiring left-handed batters in close games before the ninth inning. He’s 30; Logan is 29 and Lopez is 36. If the market trend continues, Howell can probably make a good case to earn a little more money than Logan. Say, three years and $18 million.

The Dodgers don’t necessarily see it that way.

They have one left-handed specialist in Paco Rodriguez. Another, Scott Elbert, could be ready to join the team at midseason. Right-hander Carlos Marmol has had good historical success against lefties as well, though the Dodgers haven’t had much communication with him since the off-season began.

Would they like Howell back? Sure. They’ve been more talkative with Howell’s camp than perhaps any left-handed reliever to this point. But general manager Ned Colletti suggested Saturday he isn’t as desperate for help in that area as the Giants and Rockies were when they signed Lopez and Logan, respectively.

“You have to make the right decisions despite sometimes what other teams were doing,” Colletti said, speaking generally about the market for left-handed relievers. “Some teams do it because they don’t have anybody else. It’s something done out of desperation. I get that. We’ve had to do it too from time to time. But (Howell) is another guy we’ve had a lot of conversations with. We’re still trying to get him signed.

After reportedly signing Juan Uribe on Saturday, bolstering the bullpen is Colletti’s top task. The market seems to be pointing in one direction for Howell, but the Dodgers might ultimately decide to go a different direction.

Some bullet points for a Monday morning:
END_OF_DOCUMENT_TOKEN_TO_BE_REPLACED

Not all 12 will be back, but here’s an educated guess at the likelihood of each player returning to the Dodgers, ranked in order of least likely to most:
END_OF_DOCUMENT_TOKEN_TO_BE_REPLACED 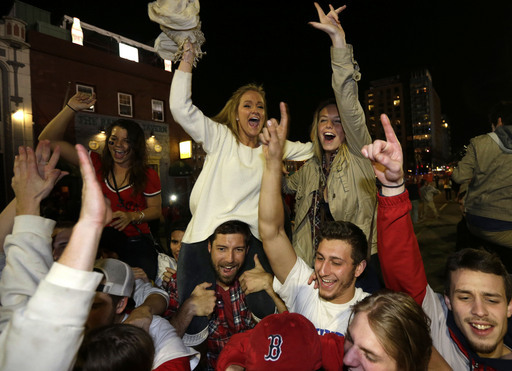 The World Series is over, making ringbearers of the Red Sox and free agents of dozens of players around baseball.

The Dodgers will have at least 10: Ricky Nolasco, Michael Young, Juan Uribe, Carlos Marmol, Jerry Hairston, Edinson Volquez, Skip Schumaker, Nick Punto, J.P. Howell and Brian Wilson. Per MLB rules, the Dodgers have exclusive negotiating rights with each player up until midnight Eastern Time Monday, after which all are free to sign with any club.

Sometime within the next five days, general manager Ned Colletti and staff must ultimately decide whether or not to extend these players a qualifying offer, a guaranteed contract for 2014 equal to the average salary of the highest-paid 125 players. This year, that’s $14.1 million.

Of the Dodgers’ 10 free agents, Nolasco is the only viable candidate to receive a qualifying offer. He made $11.5 million last year. What’s another $2.6 million? That’s the, um, $2.6 million question that’s been floating around the front offices at Chavez Ravine this month. The answer should be an easy one: Since Nolasco didn’t begin the year with the Dodgers, they won’t receive any draft-pick compensation if he signs elsewhere.

More on him, and the other free agents, later today.

We should also note here that Chris Capuano and Mark Ellis have options for 2014 in their contracts. Capuano’s is a mutual option for $8 million with a $1 million buyout; Ellis’ is a $5.75 million club option with a $1 million buyout. If the team declines the option on both players, that’s a dirty dozen Dodgers destined to hit the free-agent market.

Some bullet points for an Allantide morning:
END_OF_DOCUMENT_TOKEN_TO_BE_REPLACED 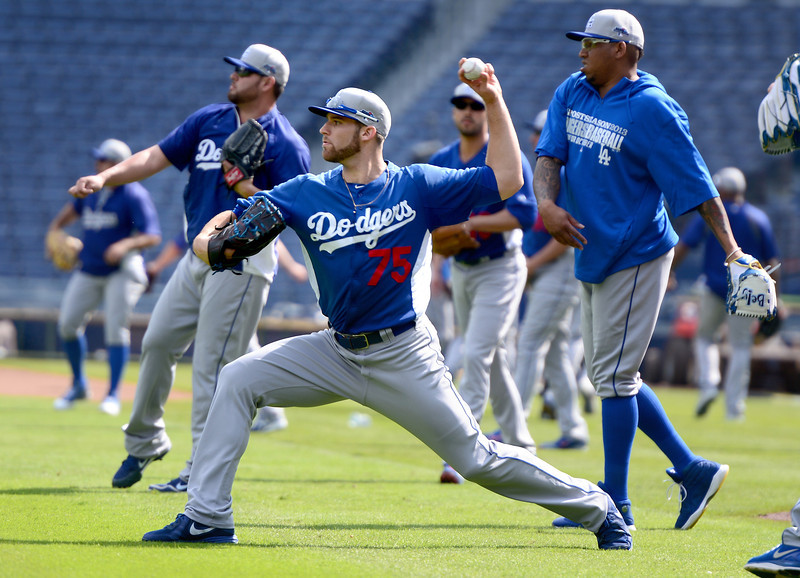 Chris Capuano said that Dodgers manager Don Mattingly told him after Thursday’s workout at Busch Stadium that Edinson Volquez was going to be the team’s long reliever in the National League Championship Series.

“We had to have a guy that could definitely be a long guy and we felt like he was the best long guy against this club,” Mattingly said Friday of Volquez.
END_OF_DOCUMENT_TOKEN_TO_BE_REPLACED