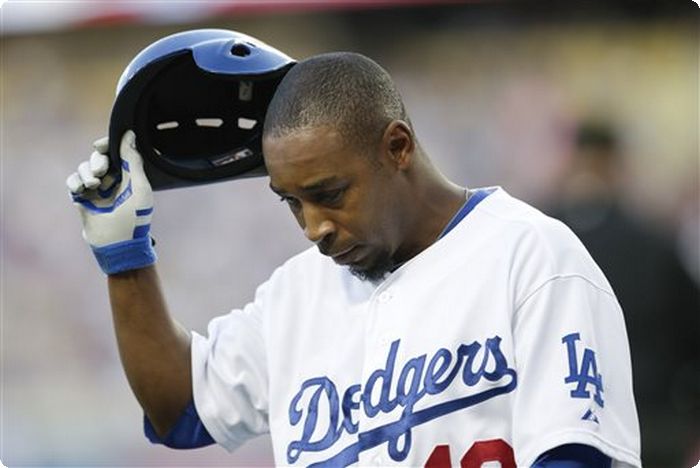 Chone Figgins, on the disabled list since June 14 with a left hip flexor strain, said he will begin a minor-league rehabilitation stint Thursday with Triple-A Albuquerque. He’s not sure how long he’ll need after missing 28 games leading into the all-star break.

“It’ll be the same as when I went down and played there the first time,” Figgins said, referring to when he was optioned to Triple-A in late April. “They’ll move me around (the field). Hopefully I can get a lot of work in.”

Friday, Figgins reported a grabbing sensation in the area of his left hip when he attempted to steal a base in drills, but he said that was the only lingering symptom of the original injury. (The team originally called Figgins’ injury a left quad strain, but Figgins said it was a hip flexor.) Now he believes the sensation was a byproduct of a lack of physical activity.

“I think it’s going to continue to get stronger,” he said.

Figgins said he will work out at Dodger Stadium Tuesday and Wednesday under the guidance of team trainers.

The Triple-A All-Star Game, between the Pacific Coast League and the International League, is Wednesday. The Isotopes begin an eight-game homestand the following day.

The Dodgers hit the road after the all-star break, visiting St. Louis, Pittsburgh and San Francisco before returning home July 29. It’s probable that Figgins will rejoin the team by the end of the month. 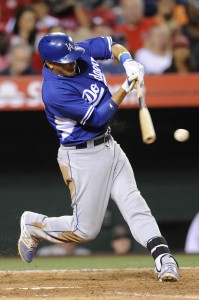 On Friday, for the fourth time in the last five games, Ramirez wasn’t in the Dodgers’ lineup. Miguel Rojas was. Ramirez’s health seems to be stuck on day-to-day, so it’s worth examining where his backups stand in what’s become a competition for fairly regular playing time.
END_OF_DOCUMENT_TOKEN_TO_BE_REPLACED

The Dodgers will soon learn more about the extent of Chone Figgins‘ strained left quad. Team physician Dr. Neal ElAttrache is expected to meet today with Figgins and pitcher Chad Billingsley, who was diagnosed with a torn flexor tendon in his right elbow.

Dodgers manager Don Mattingly said that an MRI on Figgins’ left quad revealed “a significant strain.” Figgins, who was placed on the 15-day disabled list Saturday, has noticed improvement since he first suffered the injury Friday.

“When I woke up yesterday, it was hard to pick it up,” he said. “It’s already started to loosen up.”
END_OF_DOCUMENT_TOKEN_TO_BE_REPLACED

Dodgers infielder Justin Turner isn’t starting today because he has tightness in one of his calves, manager Don Mattingly said. The injury is not considered serious. Chone Figgins is starting at third base in Turner’s place.

Turner took ground balls at third base prior to the game, moving laterally at less than full intensity.

Since taking over for the injured Juan Uribe as the Dodgers’ everyday third baseman, Turner has a .349/.406/.540 slash line. 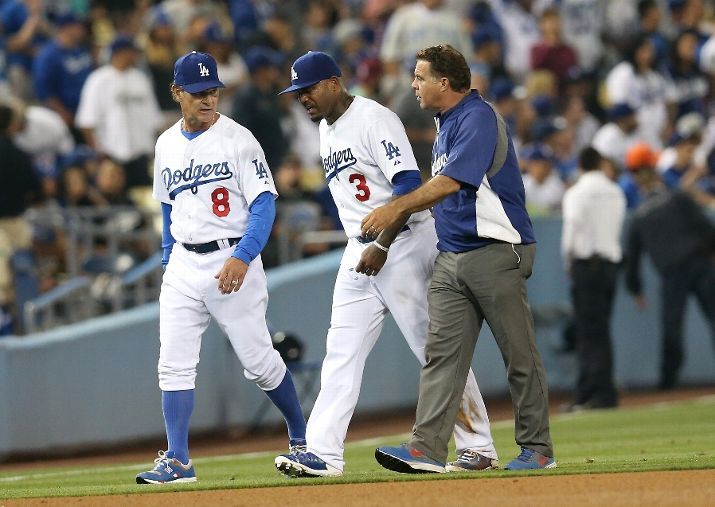 Carl Crawford limps off the field after suffering a sprained left ankle in the eighth inning of the Dodgers’ 6-3 win over the Cincinnati Reds on Tuesday. (Getty Images)

Carl Crawford sprained his left ankle in the eighth inning of the Dodgers’ game against the Cincinnati Reds on Tuesday night. The 32-year-old rolled the ankle on the turf while fielding Chris Heisey‘s double into the left-field corner. He had to be helped off the field by head athletic trainer Stan Conte and was replaced by Scott Van Slyke.

A picture of Crawford’s ankle as the injury occurred can be found here.

The injury is severe enough that Crawford entered the Dodgers’ clubhouse after the game in a wheelchair. He then limped into the showers and came back to his locker wearing a protective boot.
END_OF_DOCUMENT_TOKEN_TO_BE_REPLACED