WASHINGTON, D.C. — Game 2 between the Dodgers and Washington Nationals has been postponed until 10 a.m. Pacific Time Sunday. The rest of the series schedule remains intact.

But because Rich Hill cannot come back to pitch a potential winner-take-all Game 5 on regular rest Thursday, the Dodgers would prefer to save Clayton Kershaw for that spot. That means Kershaw won’t pitch Tuesday’s Game 4, and the start will go to rookie Julio Urias instead. 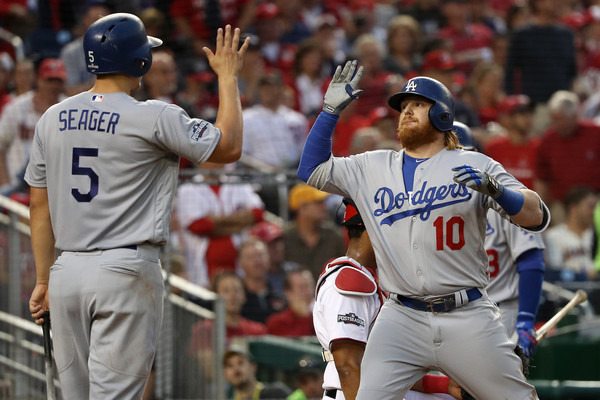 WASHINGTON, D.C. — Clayton Kershaw was not perfect, but he didn’t have to be in the Dodgers’ 4-3 win over the Washington Nationals in Game 1 of the National League Division Series on Friday. The box score is here.

Kershaw won, and that was enough, writes columnist Mark Whicker.

Kenley Jansen‘s five-out save meant he got to bat with the bases loaded in the ninth inning; other than it was business as usual for the Dodgers’ bullpen.

Game 2 starter Rich Hill has no hard feelings toward the Washington Nationals, who released him last year.

END_OF_DOCUMENT_TOKEN_TO_BE_REPLACED 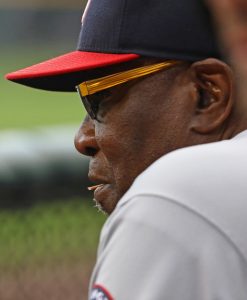 Asked to recall the first time he saw Kershaw, who will start Game 1 of the National League Division Series today for the Dodgers, Baker confessed that he couldn’t recall their initial encounter. Baker rattled off a few superlatives, then mentioned Kershaw’s charity work in Africa as an endorsement of his character.

Then he got to the balks.

“I know he’s tough to hit and he’s tough to run on,” Baker said of Kershaw. “Quite frankly I’m hoping we get some baserunners and the umpires might call a balk or two on him because he kind of rolls through the set position — which they don’t call — but I heard that really upsets him if they do call one. So I’m hoping they call maybe a couple of them.”

Here’s one of the three balks Kershaw committed this season, from a June game between the Dodgers and Braves:

END_OF_DOCUMENT_TOKEN_TO_BE_REPLACED

Clayton Kershaw will start Game 1 of the Dodgers’ National League Division Series against the Washington Nationals on Oct. 7. Rich Hill will pitch Game 2 on Oct. 7 followed by Kenta Maeda in Game 3 on Oct. 10.

The Nationals have yet to announce their rotation, only that they’re unlikely to have right-hander Stephen Strasburg available for the first round.

The location of each game is still to be determined. The Nationals began the day with a one-game lead in the battle for homefield advantage. Each team has six games left to play in the regular season.

Kershaw has started Game 1 of every playoff series the Dodgers have participated in since the 2009 National League Championship Series against the Philadelphia Phillies.

Dodgers manager Dave Roberts said the starting assignment for a possible Game 4 is to be determined, with Julio Urias one of many possible candidates.