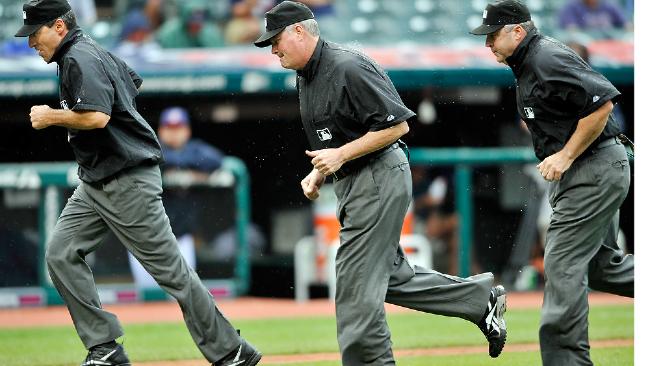 Glendale Desert Dogs players will be among the first to get a first-hand look at baseball’s proposed replay system for 2014. (Associated Press photo)

Baseball’s revamped replay system is about to take its first test-drive.

Select Arizona Fall League games from Nov. 5-9 will be the first to allow manager’s challenges of umpires’ calls. One of the games will feature the Glendale Desert Dogs, the Dodgers’ AFL affiliate. All of the games will be televised on MLB Network, so fan input on social media will likely be swift.

The proposed changes to baseball’s replay system were devised with significant input from former Dodgers manager Joe Torre, Tony La Russa and Atlanta Braves president John Schuerholz. A thorough review of the changes, including the guidelines for manager’s challenges, can be read here.

Four things to keep in mind:

1. Arizona Fall League umpires are usually Triple-A umpires, but the games will be observed by select MLB officials and umpires.

2. A spokesperson for the league said that the feedback from the replay experiences at the AFL games will be evaluated by MLB. If any changes are recommended to the proposed system, teams will know by the time their owners vote to implement it in 2014. That vote is expected to take place at the owner/GM meetings, Nov. 11-13.

3. Managers will make verbal indications of their intent to challenge a play. No flags need to be thrown in the process of challenging a call.

4. The camera angles available to AFL umpires won’t be the same as they would be during a major-league game.

A few bullet points for an Antigua and Barbudan Independence Day:
END_OF_DOCUMENT_TOKEN_TO_BE_REPLACED 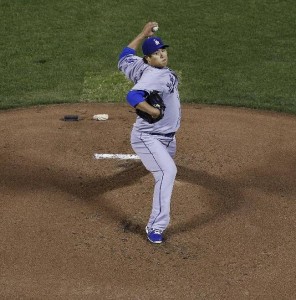 Hyun-Jin Ryu held the Giants to four hits and one run in seven innings on Tuesday. (Associated Press photo)

Our blogs were down yesterday. Sorry everyone. A dedicated team of top men in Denver patched things up in the middle of the night.

If this blog space were available during last night’s game, Hyun-Jin Ryu would have been the star.

Ryu will finish the season 14-7 with a 2.97 earned-run average, but he won’t win the National League Rookie of the Year award. Jose Fernandez has been a better pitcher and Yasiel Puig has made a bigger impact on his team than either Ryu or Fernandez.

But at some point last night I recalled filling out a brief survey back in spring training. A Korean reporter went around the press box at Camelback Ranch and asked each of the Dodgers beat writers to predict what Ryu’s won-loss record and earned-run average would be. I think I put down something quite average, say 11-11 and 3.70, simply because I couldn’t commit to the idea of Ryu being excellent or awful based on what little I knew at the time. Obviously, he’s been very good.

One recent exception had been Ryu’s ability to perform on long rest. Pitching on 11 days’ rest on Sept. 11 against the Diamondbacks, he was fairly awful, throwing 88 pitches and getting only three swings-and-misses. Ryu wound up allowing 10 hits and three runs in six innings (some double plays helped) but was the losing pitcher in a 13-6 drubbing.

Prior to that, Ryu last pitched on extra rest July 22 in Toronto. He labored through 5 ⅓ innings, throwing 102 pitches and again fooling few (seven swings-and-misses).

Why is this important?

If he doesn’t pitch the final game of the regular season Sept. 29, the next time Ryu starts will probably be Game 3 or 4 of the postseason, depending on how the Dodgers line up their rotation (and depending on if there is a Game 4; if the Dodgers are swept in the first round, we might not see Ryu until 2014). Even if he does pitch in turn Sept. 29, he’ll have six or seven days before his first playoff start.

If he doesn’t pitch Sept. 29 — and the Dodgers aren’t swept — Ryu might have as many as 12 games’ rest before his next start. That Ryu could take 11 days off and limit the Giants to one run over seven innings on Tuesday wasn’t just necessary to win the game, it was necessary to show he can survive a long layoff. That has to inspire a fair amount of confidence among Ryu’s teammates, manager and front office.

Remember too, this isn’t any pitcher we’re talking about — Ryu had never thrown a between-starts bullpen session before coming to America from South Korea late last year. He still hasn’t thrown off a mound between starts, except when tuning up following an injury. I believe that’s happened twice all season.

Some bullet points for a Wednesday:
END_OF_DOCUMENT_TOKEN_TO_BE_REPLACED 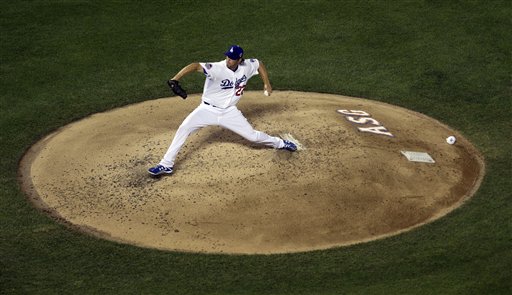 Clayton Kershaw didn’t start the All-Star Game — Matt Harvey did — though he did join a different exclusive group Tuesday.

Kershaw became the fourth Dodgers pitcher ever to throw in three straight All-Star games. He fared better than the last Dodgers pitcher to do so; Eric Gagné gave up a solo home run in the 2002 game to Alfonso Soriano, allowed three runs in one inning the following year, and tossed a scoreless inning in his final All-Star appearance in 2004.

Don Newcombe (1949-51) is the other. Like Gagné, his third and final All-Star appearance was the only one in which he didn’t allow a run.

Whit Wyatt, Ralph Branca and Sandy Koufax were all chosen to pitch in three straight All-Star Games or more, but for various reasons did not.

Of course, some were still focused on one Dodger who wasn’t in the game Tuesday.

he is a WS manager 2x if he wanted the NL to have home field advantage you wouldn't leave Puig out who is hitting every pitcher out there.

The American League won the game, 3-0, and will have home-field advantage in the World Series. Mariano Rivera threw a scoreless inning, was named MVP and will be responsible for every baby born today in New York City named “Mariano,” “Mo” or, perhaps, “Sandman.”

Some bullet points for a Slovakian Independence Day:

END_OF_DOCUMENT_TOKEN_TO_BE_REPLACED 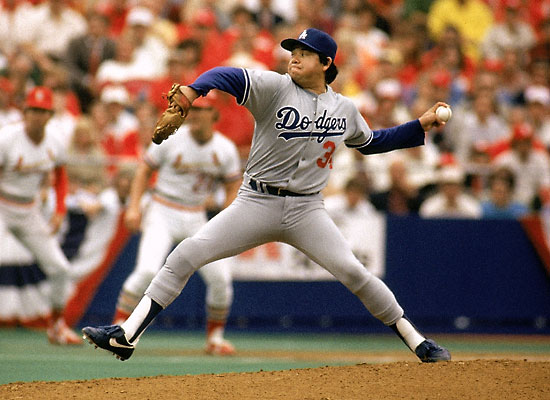 END_OF_DOCUMENT_TOKEN_TO_BE_REPLACED

Collins and Lyons call all road games outside California and Arizona on Prime Ticket and KCAL (Channel 9). Monday and Steiner call all Dodger games on KLAC (570-AM). Valenzuela is the color commentator on all home games and select road games on KTNQ (1020-AM) and Yiguez calls all Dodger games for the club’s Spanish-language broadcast.

Here’s some more about the six broadcasters from the team’s official press release:
END_OF_DOCUMENT_TOKEN_TO_BE_REPLACED