Frankie Montas allowed two singles, struck out two batters, and picked off another in one inning with Triple-A Oklahoma City on Monday.

Here’s one scouting report from the broadcaster’s booth:

Frankie Montas allowed 2 hits with 2 strikeouts in a scoreless 6th. Fastball was at 96-98, with a couple of 99's. #Dodgers

Montas isn’t eligible to rejoin the Dodgers before Friday because he’s on the 60-day disabled list. He had surgery to remove a rib near his right shoulder in February.

SAN DIEGO — Frankie Montas pitched his first minor league rehab game for Double-A Tulsa on Sunday. The right-hander allowed one run in two innings on a solo home run. He also walked one batter and struck out two.

How was his velocity, you ask?

Frankie Montas making his 2016 debut for Tulsa. His first two fastballs clocked in at 98 mph.

Montas' third pitch of the 2nd inning touched 100 mph according to the NW Arkansas' broadcaster.

END_OF_DOCUMENT_TOKEN_TO_BE_REPLACED

Frankie Montas will start Sunday for Double-A Tulsa. The right-hander had been scheduled to piggyback off the starting pitcher in his first game of the season after joining the club Saturday; now he’s scheduled to throw two innings against the Northwest Arkansas Naturals before handing the ball to the bullpen.

Montas hasn’t pitched this season as he recovers from rib resection surgery near his right shoulder in Februrary. The right-hander pitched as a starter and a reliever in the Chicago White Sox organization before the Dodgers acquired him in a three-team, multi-player trade in December.

Dave Roberts said Friday in San Diego that Montas is a candidate to pitch as a starter or a reliever for the Dodgers once he’s healthy. Montas was recently clocked throwing 100 mph at the Dodgers’ extended spring training facility in Arizona.

Pitcher Frankie Montas is scheduled to begin a minor league rehab assignment Saturday with Double-A Tulsa, and he’ll begin his assignment out of the bullpen.
END_OF_DOCUMENT_TOKEN_TO_BE_REPLACED 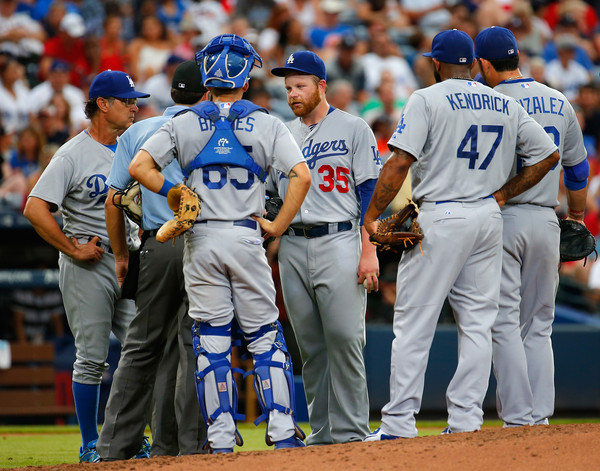 Brett Anderson isn’t expected back in Dodgers camp for a week after undergoing back surgery Thursday. (Getty Images)

That was Dave Roberts‘ response when I asked him for an update about the left-handed pitcher who underwent surgery on a bulging disk in his lower back Thursday. Anderson isn’t expected back in camp for another week.

“As I understand it, he’s just supposed to kind of lay low right out of surgery,” Roberts said.