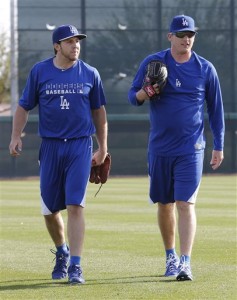 Jarret Martin (right, with Daniel Moskos) was added to the Dodgers’ 40-man roster in November and is taking part in his first major-league spring training. (Associated Press photo)

“I didn’t want to be the guy behind in my first big league camp,” Martin said.

He isn’t behind, and the extra work hasn’t had any adverse effects on his left arm. His were short sessions, about 30 pitches max, which suits Martin’s semi-new role as a relief pitcher.

In 14 starts last season for Single-A Rancho Cucamonga, Martin went 5-7 with a 4.79 earned-run average. His control (43 walks in 71⅓ innings was subpar. The faster track to the Dodgers’ 40-man roster resided in the bullpen. There was plenty at stake, since Martin was eligible for the Rule 5 draft if the Dodgers didn’t add him to the 40-man.

Martin made the switch in June and took to the role quickly. As a reliever, his opponents’ batting average dropped from .263 to .212. Promoted to Double-A Chattanooga in August, Martin posted a 1.64 ERA in 11 appearances. He got his coveted 40-man roster spot in November.

There’s no such thing as having too few left-handed relievers in the major leagues, but once camp breaks Martin is likely headed to Double-A or Triple-A. Once there, Martin has the opportunity to define his own role.

“They said (being a reliever) isn’t permanent, but if it is I’ll accept it,” Martin said. “We’ve got a great starting rotation, so I understand that.”

Martin needs to throw more strikes; he threw 56 percent of all his pitches for strikes last season between Single-A and Double-A. He might, by his own admission, need to throw fewer changeups and stick to his fastball and slider as a relief pitcher. And he needs to learn to pace himself.

“As a starter I never really paced myself,” Martin said. “I actually threw harder as a starter late in the game.”

Some bullet points for a Gambian Independence Day:
END_OF_DOCUMENT_TOKEN_TO_BE_REPLACED

Two members of the Dodgers’ 2011-12 relief corps, Josh Lindblom and Javy Guerrra, started against each other in a Triple-A game Friday night.

Lindblom allowed three runs in 6 2/3 innings for the Round Rock Express and won. The right-hander, now a member of the Texas Rangers’ organization, has been converted to a starter.

Guerra allowed four runs (two earned) in five innings for the Albuquerque Isotopes and was the ‘Topes pitcher of record in the 4-3 loss. The box score is here.

The Dodgers don’t plan to convert Guerra exclusively to a starter’s role. General manager Ned Colletti said via text message Friday that they’re stretching him out and having him throw four pitches to give the team the option of using him as a starter, long man, or short reliever.

Rick Renteria, manager of Team Mexico, stops for an interview after his team’s 10-2 loss to the Dodgers on Wednesday. If you watched this interview on TV in Mexico, now you know who that goofy-looking guy with the cell phone camera was.

The Dodgers are hosting the Texas Rangers today. Scott Van Slyke is starting at first base in his first call-up to the major league side since being demoted from the 40-man roster last year.

Keep an eye on the Rangers’ bullpen. Former Dodger Josh Lindblom, traded last year to the Philadelphia Phillies for Shane Victorino, is scheduled to pitch for Texas. Not many 25-year-old middle relievers can say they were traded for two former All-Stars, but Lindblom can (Victorino and Michael Young).

Three significant bits of injury news were widely reported out of Glendale this morning (I’m in Tempe) that I’ll pass along:

1. Zack Greinke, feeling better today after missing yesterday’s start with a flu, will throw a bullpen session Friday and pitch Monday against the Milwaukee Brewers.

3. Scott Elbert felt fine one day after throwing on flat ground for the first time since elbow surgery in January.

A bunch of noteworthy bullet points:

END_OF_DOCUMENT_TOKEN_TO_BE_REPLACED

The Dodgers traded right-handed reliever Josh Lindblom, minor league right-hander Ethan Martin and a player to be named later or cash considerations to the Phillies for Victorino on Monday, hours in advance on baseball’s 1 p.m. non-waiver trade deadline.

“We’re excited to add an All-Star caliber player with postseason experience,” general manager Ned Colletti said in a statement. “He plays the game with passion, gives us a top of the order bat from both sides of the plate, can steal bases and is solid defensively in the outfield.”