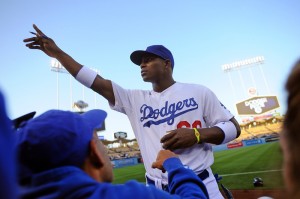 Dodgers outfielder Yasiel Puig remained second to Atlanta Braves first baseman Freddie Freeman in the “Final Vote” tally announced Wednesday morning by MLB. A spokesperson for the league told me that there will be no announcements about exact vote totals or margin of separation during the voting period, other than what MLB chooses to release through MLB.com. So that’s all the data we have: Freeman first, Puig second.

As I pointed out in yesterday’s live chat, it’s in the league’s interest that fans feel like they’re a part of the All-Star selection process, while at the same time maintaining the integrity of the product. MLB believes it’s found the right balance. Some, particularly those who feel the game shouldn’t count for home-field advantage in the World Series, will disagree.

Regardless, the winner of the “Final Vote” probably won’t play much in the game if he plays at all. That’s particularly true for Freeman, who must take a number behind three first basemen already selected to the National League roster. So what does it mean if – gasp! – Puig ultimately loses the vote to Freeman?

Does it mean a plurality of baseball fans agree with NL manager Bruce Bochy and others who believe that Puig isn’t experienced enough to be an All-Star?

Does it mean the Braves’ social media team is doing a better job convincing the world to vote for Freeman than the Dodgers are for Puig?

Is it a conspiracy?

Some bullet points for a Nikola Tesla Day:
END_OF_DOCUMENT_TOKEN_TO_BE_REPLACED 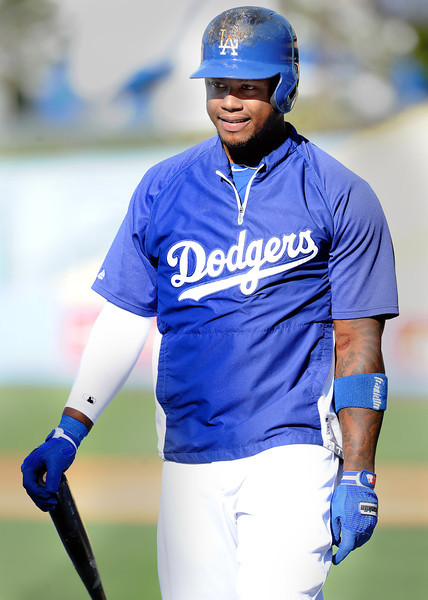 “We’re learning not to listen to Hanley,” Dodgers manager Don Mattingly said to a cackling crowd of reporters. “We’re going to listen to medical on this.”

It wasn’t “two days,” but the Dodgers’ medical staff had some good news for Ramirez Monday. An MRI on his strained left hamstring revealed no further damage, and he may be able to miss the disabled list altogether.
END_OF_DOCUMENT_TOKEN_TO_BE_REPLACED 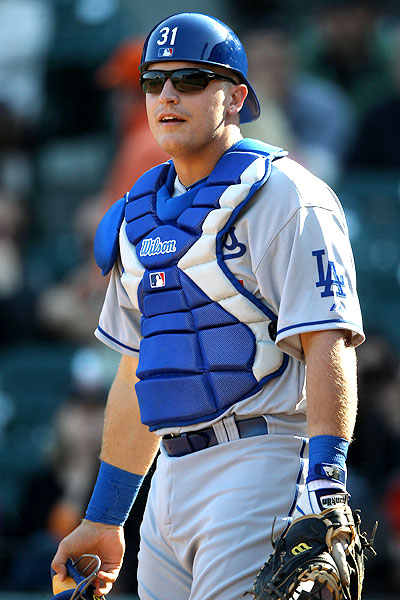 Tim Federowicz posted a 1.643 OPS after being demoted to Triple-A Albuquerque.

Tim Federowicz returned to Dodger Stadium on Wednesday. In his mind, and on the depth chart, it was like he never left.

Dodgers manager Don Mattingly said that Federowicz will be the team’s number-two catcher, supplanting veteran Ramon Hernandez, whose 0 for 4 performance against the Arizona Diamondbacks on Tuesday lowered his batting average to .045. Hernandez, who was obtained from Colorado for pitcher Aaron Harang on April 6, is staying on as the Dodgers’ third catcher.
END_OF_DOCUMENT_TOKEN_TO_BE_REPLACED 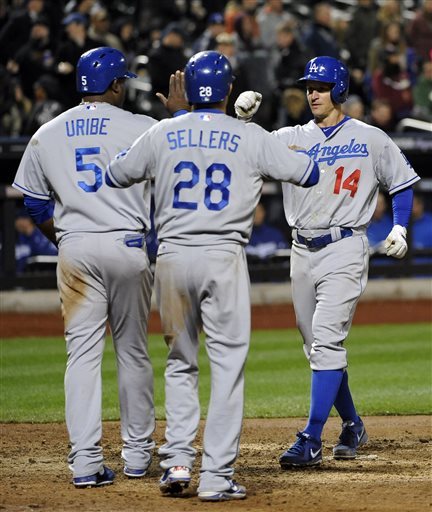 One of these men might not be on the active roster by game time tomorrow. (Associated Press photo)

Expect the Dodgers to shed an infielder for this weekend’s series against the San Francisco Giants.

Before we assume that Mark Ellis will be placed on the 15-day disabled list to make room for Clayton Kershaw, who must be activated from the bereavement list before he starts Friday, consider Ellis’ career numbers against the San Francisco Giants’ scheduled starters.

So if Ellis’ right quadriceps is healthy tomorrow — he wasn’t far off Wednesday — it’s entirely possible that the Dodgers would use him Saturday and Sunday and keep him on the bench as a late-innings option Friday.

If that’s the case, look for the Dodgers to option Justin Sellers to Triple-A Albuquerque. Sellers is hitting .200/.278/.262. His slugging percentage is the fifth-lowest in the National League, just ahead of Juan Pierre (.253). The Dodgers don’t need a slugger at every position, but they’ve got an extra infielder if Ellis and Hanley Ramirez are both healthy. Sellers’ numbers could leave him the odd man out.

A less likely move, if the Dodgers are so inclined, would be to designate Luis Cruz for assignment. Cruz hasn’t hit all season (.088/.117/.088), allowing Juan Uribe to surpass him on the depth chart at third base. While Sellers still has an option year to burn, Cruz does not, so this would be the most convenient means for removing Cruz from the active roster.

It’s a rash move, sure. By designating Cruz for assignment, the Dodgers would risk losing him altogether when they could just as easily keep Sellers or Ellis in the organization. But it’s an option, and something to keep an eye on in the next 24 hours.

END_OF_DOCUMENT_TOKEN_TO_BE_REPLACED

Dodgers manager Don Mattingly had different reasons for each of the changes. Cruz, who is still searching for his first hit of the season after 19 plate appearances, “needs to put those behind him because he can’t change anything that happened in the first five games of the season,” Mattingly said.

“Hopefully he can see the forest because he was getting a little close to the trees, can’t see his way out.”

Juan Uribe will start at third base and bat sixth.