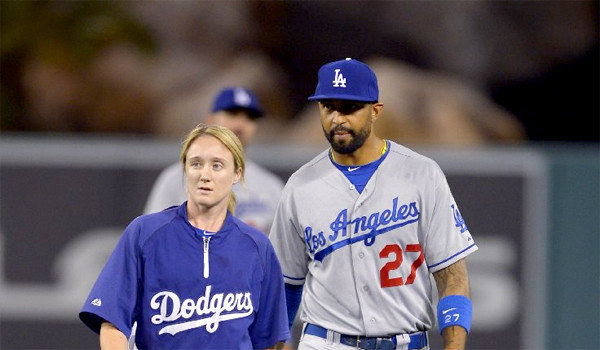 END_OF_DOCUMENT_TOKEN_TO_BE_REPLACED

The Dodgers (14-12-4) overcame a rare bad outing by Clayton Kershaw, scoring six runs off the Arizona bullpen to break open a 3-3 game before an announced crowd of 12,799 at Salt River Fields at Talking Stick. [box score]

Matt Angle went 1-for-2 with his first Cactus League home run, a two-run shot in the eighth inning off Keith Hessler. Justin Sellers went 1-for-2 with a two-RBI single in the sixth. Dee Gordon went 2-for-3 and 10 other Dodgers collected one hit each.

Gordon stole his 11th base of the spring in the first inning; he was caught for the fourth time an inning later. Relievers Josh Lindblom, Ronald Belisario, Scott Rice, Stephen Ames and Wil Ledezma did not allow a run over the final 5 1/3 innings.

Kershaw allowed six hits and three earned runs in 3 2/3 innings. More on him in tomorrow’s editions. A few more notes:

END_OF_DOCUMENT_TOKEN_TO_BE_REPLACED

Tempers flared in a loss to the Brewers in Glendale, and the Dodgers rapped out 11 hits to beat the Cubs in Mesa, in the team’s final day of split-squad action in spring training.

Both benches were warned in the sixth inning of a 9-4 loss to Milwaukee after Dodgers starter Chris Capuano threw a pitch behind Ryan Braun. That followed a series of hit batters –one (Norichika Aoki) by Capuano and two (Jerry Hairston Jr. and Juan Rivera) by Milwaukee pitchers earlier in the game.

That was the end of the drama, however, and the Brewers scored eight runs over the final three innings to erase a 4-2 deficit.

Capuano allowed two hits, one (earned) run on a solo shot by Braun, walked one and struck out seven in six innings. His Cactus League ERA stands at 2.75. Matt Guerrier relieved him in the seventh inning and gave up a 3-run home run to the first batter he faced, Brooks Conrad, in his first game since March 11.

Guerrier was actually pitching his third game in five days, including minor-league games, and afterward declared himself free of any back pain and healthy to start the season.

“As far as I am concerned, (the injury) was over a week ago,” he said.

The Brewers’ Carlos Gomez hit a three-run home run off losing pitcher Jamey Wright in the seventh inning. Todd Coffey gave up three hits and four runs — none earned, thanks to a Jake Lemmerman error –in two-thirds of an inning. His spring ERA ballooned to 7.71.

Andre Ethier doubled and homered in four at-bats, giving him 15 extra-base hits among his 18 this spring.
END_OF_DOCUMENT_TOKEN_TO_BE_REPLACED