The Dodgers have boasted about their roster depth all season. Now, one statistic neatly sums up just how often they’ve needed it.

The Dodgers are one of two teams without a current 40-man roster player who hasn’t seen action in a major league game this season. The New York Mets are the other.

It’s not unusual for teams to exhaust their 40-man rosters in September, when active rosters expand from 25 to 40. To do so in mid-August is rare; the Dodgers achieved the feat when Rich Hill made his debut on Aug. 24.

Hat tip to Jason Martinez, found/director of content for rosterresource.com, for doing the research on this. 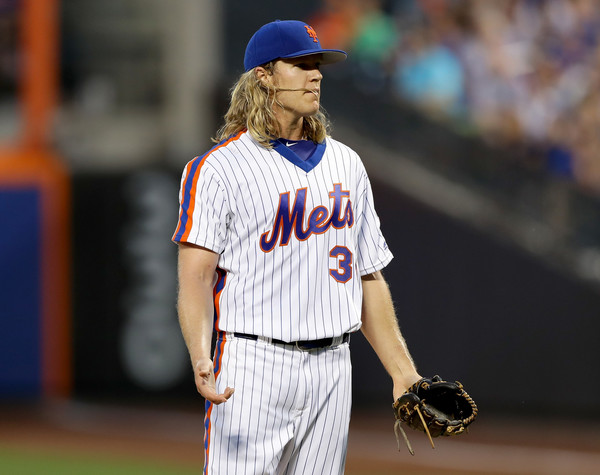 Noah Syndergaard was ejected for throwing a pitch behind Chase Utley in the Dodgers’ 9-1 win. (Getty Images)

NEW YORK — Chase Utley owned the Mets so bad on Saturday, a day the franchise set aside to honor its 1986 championship team, it became a part of his Wikipedia page. Utley hit two home runs, including a grand slam, and effectively got Noah Syndergaard thrown out of the game when a pitch whizzed behind him in the third inning of the Dodgers’ 9-1 win. The box score is here.

END_OF_DOCUMENT_TOKEN_TO_BE_REPLACED 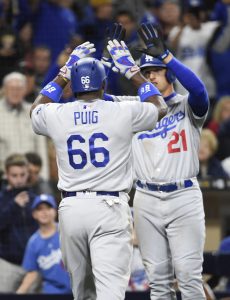 NEW YORK — Trayce Thompson was removed during the fifth inning of the Dodgers’ game against the Mets on Saturday with lower back soreness.

Puig had been given a day off by manager Dave Roberts and was scheduled to return to the starting lineup tomorrow.

The ball gets away from @Noahsyndergaard, he is asked to leave. @lverrett4 will enter with one out in the 3rd. #Mets pic.twitter.com/SFmeM3hv5M

NEW YORK — In the third inning of the sixth game between the New York Mets and the Dodgers this season, Mets pitcher Noah Syndergaard was ejected for throwing a pitch behind the back of Dodgers second baseman Chase Utley.

Here’s a closer look at the pitch in question, the first pitch Utley saw in his second plate appearance:

END_OF_DOCUMENT_TOKEN_TO_BE_REPLACED

First, the background: FoxSports.com reported earlier today that the Mets had an issue with the Dodgers’ use of laser rangefinders prior to games to position their outfielders, and subsequently using physical markers in the outfield during a game:

The Dodgers, after using the laser rangefinder, wanted to use markers on the playing surface to define the desired positions for their outfielders, and informed the Mets’ grounds crew of their plans.

Initially, the Mets grounds crew agreed that the Dodgers could leave two marks in center field and one in left. … The Mets’ grounds crew, however, told their superiors that the Dodgers informed them that if the markers were removed, Dodgers players would dig holes in the outfield with their cleats. The Mets then instructed their grounds crew to erase or obliterate anything they saw on the playing surface.

The Mets even reported what the Dodgers were doing to Major League baseball, a fact that surprised manager Dave Roberts since Roberts said “everyone’s doing it” — using lasers and markers to help position their outfielders.

Here’s more from Roberts on the topic: