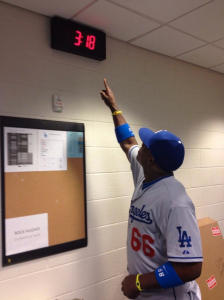 In this photo posted to the Dodgers’ Facebook account today (and quite possibly staged), rookie Yasiel Puig points to a clock inside Marlins Park.

Yasiel Puig is on time and in the Dodgers’ lineup today.

Puig was benched (for poor play) and fined (for being late) Tuesday afternoon, only to come back and hit the game-winning home run later in the day.

The Dodgers are facing a familiar hard-throwing right-hander in Nate Eovaldi.

The notable absence from the lineup today? Juan Uribe, who’s hitting .588 (10-for-17) with three doubles, a homer and four RBI through five games on the Dodgers’ road trip. Uribe ranks ninth in the National League with a .355 batting average (22-for-62) in 19 games this month. He’s 9 for 13 (.692) with three RBI in five games against Miami this season — but will have to pull a Puig off the bench to continue his hot streak today. 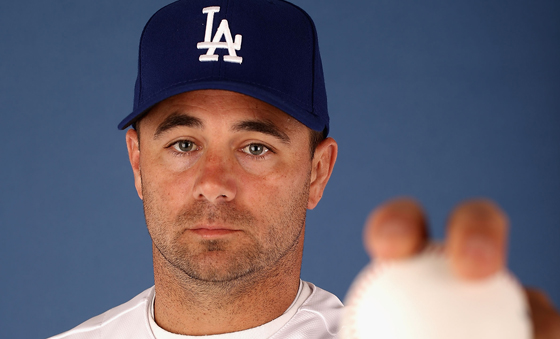 Some more bullet points for a Wednesday morning:
END_OF_DOCUMENT_TOKEN_TO_BE_REPLACED

That photo won’t make the Bad Spring Training TwitPics hall of shame, but that’s only because I didn’t post it on Twitter. It was the sight greeting everyone at Camelback Ranch on the first day of spring training Tuesday morning.

Tuesday was an inherently eventful day, typically droll as spring training days go but more exciting than the last four and a half months of no baseball. I posted the blow-by-blow on my Twitter account, which you can follow here if you’re not doing so already. The question of what the Dodgers will do with their eight starting pitchers dominated the dialogue. You can read all about that here.

Today marks the first day of workouts for pitchers and catchers. Manager Don Mattingly was in rare form, using humor to deflect questions about his expiring contract. Comparing himself to Philip Seymour Hoffman’s portrayal of former Oakland manger Art Howe on a one-year contract with the Moneyball A’s, he told reporters at Camelback Ranch, “I’m built better than that guy.”

There’s no contest, really (see here and here). Onto some heavier material, because we can’t get much lighter …

END_OF_DOCUMENT_TOKEN_TO_BE_REPLACED

Between injuries and poor play, however, Ramirez wore out his welcome in Miami. In 2011 Ramirez missed the final two months of the season with a shoulder injury; he also missed two weeks in June with a lower back strain. His stats suffered too: a .243 average, .333 on-base percentage, .379 slugging percentage, 10 home runs and 45 RBIs were all career lows. Ramirez’s stolen bases have also plummeted from 51 in 2006, to 20 in 2011, and 14 this year.

But he gives an immediate boost of power to a Dodgers team that ranks last in the majors in home runs (60). Ramirez’s 14 home runs and 47 RBIs both ranked second on the Marlins; only Matt Kemp has hit as many home runs and only Andre Ethier has more RBIs among the Dodgers. Ramirez is batting .246 this season, mostly out of the second or third spot in the order.

A shortstop in his first six major-league seasons, Ramirez switched to third base this season after the Marlins signed veteran shortstop Jose Reyes last winter. Ramirez’s eight errors are the ninth-fewest among everyday major-league third basemen.

Ken Rosenthal of Fox Sports, quoting Marlins owner Jeffrey Loria, wrote on his Twitter account: “It’s no secret I love the kid. He needs to have a fresh beginning, a new beginning. This is a very painful moment for me. But we had to do something.”

Choate, 36, joins his fifth team in a 12-year major league career. He is tied for 19th in the National League in appearances (44) and has held left-handed hitters to a .150 batting average this season while not allowing a home run.
END_OF_DOCUMENT_TOKEN_TO_BE_REPLACED