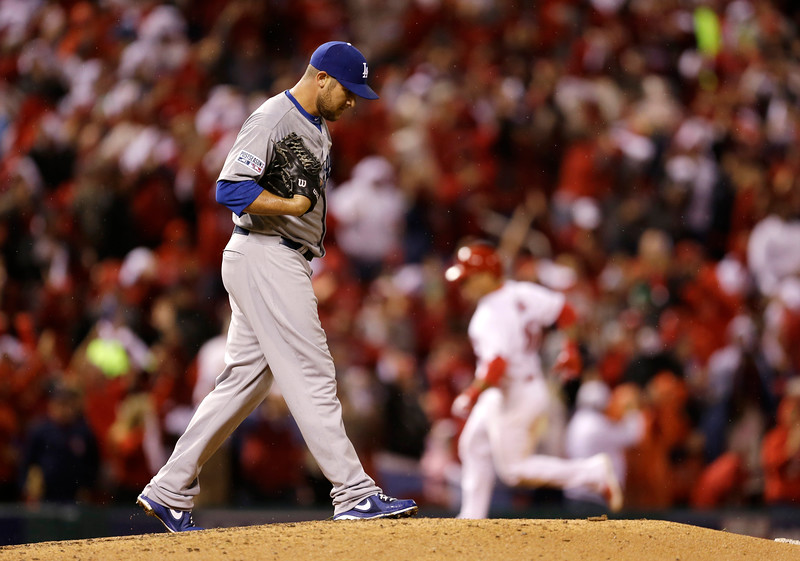 Dodgers pitcher Scott Elbert reacts after giving up a two-run home run to St. Louis Cardinals’ Kolten Wong (background) during the seventh inning of the Dodgers’ 3-1 loss in Game 3 of the NLDS on Monday. (Associated Press photo)

Scott Elbert, who journeyed back from Tommy John surgery to capture an unlikely playoff roster spot in 2014, has elected free agency and been removed from the Dodgers’ 40-man roster.

Elbert, 29, was designated for assignment in June, went unclaimed, and pitched his way back onto the Dodgers’ roster for a September call-up. He made seven regular-season appearances and allowed only one run, then was a surprise selection to the Dodgers’ National League Division Series roster against the St. Louis Cardinals.

In his only postseason appearance, Elbert gave up a two-run home run to the Cardinals’ Kolten Wong in Game 3 of the series, a 3-1 Dodgers loss.

In six major-league seasons, Elbert has made 127 appearances, all out of the Dodgers’ bullpen. He has a 4-3 record and a 3.57 earned-run average.

Elbert was a first-round draft pick by the Dodgers in 2004.

Dodgers pitcher Scott Elbert reacts after giving up a two-run home run to St. Louis Cardinals’ Kolten Wong (background) during the seventh inning of the Dodgers’ 3-1 loss in Game 3 of the NLDS on Monday. (Associated Press photo)

ST. LOUIS >> The Dodgers find themselves in a familiar position after a 3-1 loss in Game 3 of the NLDS. As Mark Whicker writes, we all know how it ended last year. Clayton Kershaw acknowledged the gravity of moment after being officially named the Dodgers’ Game 4 starter.

On the eve of the National League Division Series, Dodgers manager Don Mattingly had a choice. He could keep 14 position players and 11 pitchers on the roster, like he did a year ago, or acknowledge the reality of his unsettled middle-relief situation and his Game 3 starter.

END_OF_DOCUMENT_TOKEN_TO_BE_REPLACED

Here is the complete roster:
END_OF_DOCUMENT_TOKEN_TO_BE_REPLACED

Left-hander J.P. Howell has been the Dodgers’ southpaw workhorse, appearing in 64 games this season. Only eight lefties have appeared in more games in the National League this season. However, Dodgers manager Don Mattingly has no plans on changing the Dodgers’ late-innings mix: