A fan petition calling on the Dodgers and Time Warner cable to “broker a deal” with local cable providers and “stop the defacto blackout” of the club on local television has 491 signatures on the website FansRising.com.

The campaign is planning additional action to raise attention to the issue, according to a press release from Fans Rising. Comments left by fans reveal that multiple petition signers are elderly fans no longer able to attend games who can’t watch on television.

“I saw my first Dodger game at Ebbets Field in 1938 and have been a faithful fan ever since,” wrote Doris Schalk. “I am now 84 and unable to drive, so don’t get to many games anymore, but being able to watch them all these years has been a god-send. The radio guys are very good – BUT I miss my Vin AND my Dodgers.”

Some bullet points for a Hump Day:
END_OF_DOCUMENT_TOKEN_TO_BE_REPLACED

SYDNEY — If we were to focus just on the baseball, Opening Day followed a very predictable script. Clayton Kershaw was the best pitcher in the ballpark. The Dodgers’ bullpen followed a predictable order of Chris Perez (⅓ of an inning), Brian Wilson (1 inning) and Kenley Jansen (1 inning) in closing out the game without allowing a run. Paul Goldschmidt didn’t waste a single at-bat but the Dodgers have a deeper lineup, and found a way to score more runs than their opponent. The final score was 3-1 and you can read about the game here.

Also, if we were to focus just on the baseball, we would completely miss the point of staging Opening Day on another continent 12,000 kilometers — about 7,500 miles, if this conversion app is working right — away from Los Angeles.

Ellis is unique among the Dodger players. He came to Sydney in November of last year, along with Arizona Diamondbacks pitcher Patrick Corbin, on a goodwill tour to drum up interest in the two season-opening games in Sydney. It’s fair to say he was more personally invested in the non-baseball aspects of the game than his teammates. Attendance fell short of a sellout by little more than 4,000 fans.

About those fans. As I warned, they weren’t the savviest bunch. They cheered loudly at the sight of the game’s first foul ball, a rare souvenir that means something completely different in baseball than cricket. Thrice a batter fouled a ball atop the roof overhanging the seats behind home plate. On one occasion, the ball remained lodged on the roof; the other two times it fell back toward the waiting hands of the crowd.

When Scott Van Slyke hit the first and only home run of the game — of the season, no less — it landed into a near-empty section of seats just beyond the right-field fence. There were two empty swaths of seats in the outfield, a virtual impossibility in the U.S.

Here, the home run elicited less a reaction than the first foul ball.

“Toronto was like that when we first started going there,” Dodgers manager Don Mattingly said, “but it didn’t take long.” 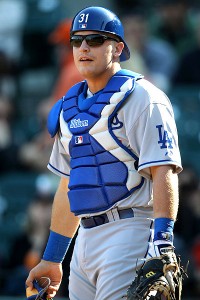 Tim Federowicz was optioned to the minor leagues Friday to get the Dodgers to 25 men on their Opening Day roster. (Associated Press photo)

SYDNEY — Greetings from tomorrow.
The Dodgers, as expected, trimmed their roster to 25 this afternoon. Outfielder Joc Pederson, pitcher Zach Lee and infielder Miguel Rojas were reassigned to the minor leagues. Zack Greinke, Dan Haren and Brandon League were given roster exemptions and begin the season as “inactive.” Carl Crawford was placed on paternity leave. Pitchers Chad Billingsley (right elbow surgery) and Josh Beckett (right thumb contusion) and outfielder Matt Kemp (ankle surgery) on were placed on the 15-day disabled list, retroactive to Wednesday.

Not as expected: Catcher Tim Federowicz was optioned to the minor leagues. Federowicz was on a short list of players with contract options, so even though he spent all of 2013 as the backup to A.J. Ellis, Federowicz won’t be active for the first two games of the season. Drew Butera will back up Ellis.

First pitch is at 1:47 a.m. Pacific Time — not 1, or 1:30, as previously reported here. There is a chance of rain in the forecast and, fortunately, sliding glass windows in the press box.

Game 2 pitcher Hyun-Jin Ryu will be speaking at a press conference at the Sydney Cricket Ground shortly, followed by baseball commissioner Bud Selig. If you’re not following me on Twitter or Tout, hop on it and you’ll get game updates throughout the middle of the night.

Or you can just wake up in the morning like a normal person, come back to this blog and catch up on what you missed.

Here is the Dodgers’ Opening Day roster, by position:
END_OF_DOCUMENT_TOKEN_TO_BE_REPLACED 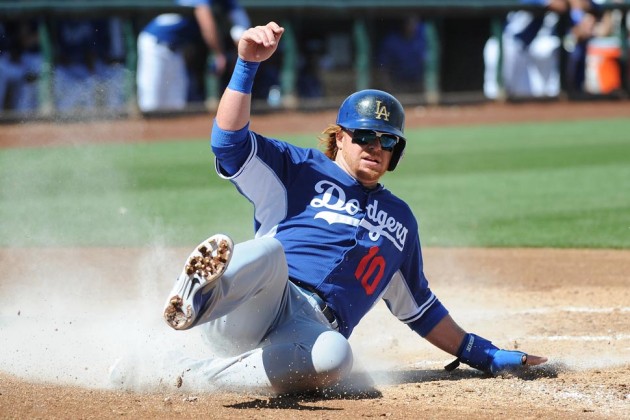 JJustin Turner will bat second and play second base, when the Dodgers play the Arizona Diamondbacks on Opening Day at 1 a.m. Pacific Time Saturday in Sydney, Australia.

The choice of Turner is somewhat surprising, since he was only added to the Dodgers’ 40-man roster on the final weekend of spring training. Dee Gordon and Alex Guerrero had been the presumed favorites to get the Opening Day start from the beginning of camp.

Gordon, who bats left-handed, was not expected to start against the left-handed hitting Miley. Since Turner was chosen over Guerrero, there is a strong chance that Guerrero will be optioned to the minor leagues when the Dodgers hand in their roster to Major League Baseball tomorrow. 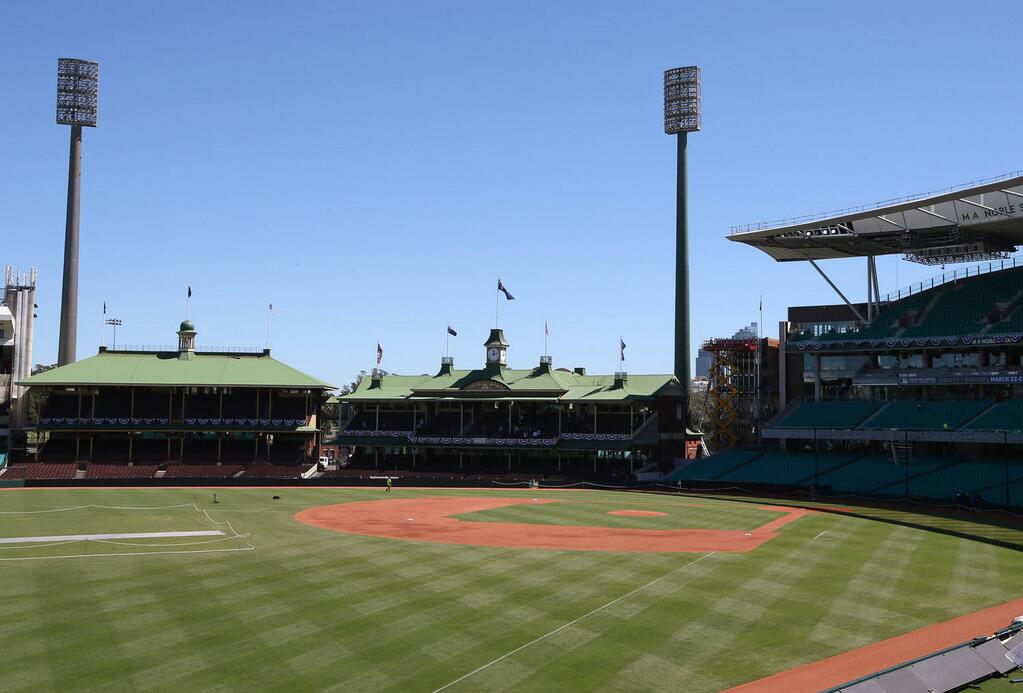 The Sydney Cricket Ground, as configured for four days of baseball games.

Apropos of nothing — the time in Sydney, the time in Los Angeles, my newspaper’s deadlines — I’m checking in with one last update before boarding a flight to Australia.

Here’s how the Dodgers will line up:
END_OF_DOCUMENT_TOKEN_TO_BE_REPLACED