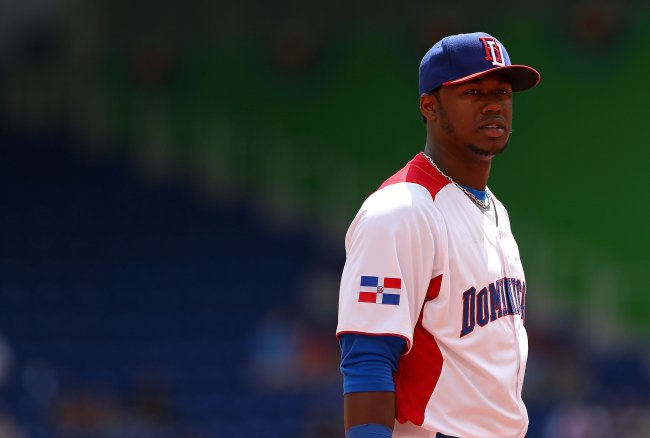 The L.A. Dodgers’ Hanley Ramirez, playing for the Dominican Republic, looks on during a World Baseball Classic second round game against Puerto Rico on March 16, 2013 in Miami. (Photo by Mike Ehrmann/Getty Images)

With Opening Day 12 days away, that makes Ramirez doubtful for the Dodgers’ season-opening series against the San Francisco Giants — if not longer.

Ramirez was scheduled to arrive in Phoenix later today to undergo an MRI exam. The Dodgers will learn the full extent of his injury then.

Luis Cruz was scheduled to start at shortstop in the Dodgers’ exhibition game against the Kansas City Royals on Wednesday and could be a longer-term option to replace Ramirez if the team chooses to move him from third base.

Hanley Ramirez and the Dominican Republic beat Puerto Rico 3-0 on Tuesday to claim their first World Baseball Classic title. It was a bittersweet day for the Dodgers, who could only watch as Ramirez jammed his thumb diving for a ground ball in the third inning:

Ramirez, who was playing third base, stayed in the game but later came out and was fitted with a splint. The Dodgers reportedly won’t know the extent of the injury until tomorrow.

Hanley Ramirez will get an MRI on his thumb in Arizona tomorrow, per Moises Alou.

According to CBSSports.com’s Danny Knobler,

Dominican Republic manager Tony Pena and third-base coach Juan Samuel both said they don’t believe that Ramirez is seriously hurt, but the Dodgers likely won’t feel comfortable until Ramirez’s MRI comes back clean and he’s able to take the field again for them.

END_OF_DOCUMENT_TOKEN_TO_BE_REPLACED

Hanley Ramirez said before the World Baseball Classic that he would play each game as if it was his last. Turns out he really didn’t want the WBC to end.

The Dodgers shortstop, serving as the designated hitter for his native Dominican Republic, went 1 for 3 in a 4-1 win over the Netherlands in a WBC semifinal game at AT&T Park in San Francisco on Monday.

END_OF_DOCUMENT_TOKEN_TO_BE_REPLACED

The Dodgers have signed four players to minor-league deals: Curacao native Dashenko Ricardo, who is playing for The Netherlands in the World Baseball Classic, and three amateurs from the Dominican Republic.

Ricardo might be catching Dodgers pitcher Kenley Jansen, and playing against Dodgers shortstop Hanley Ramirez, when the Netherlands plays the Dominican Republic tomorrow night in a WBC semifinal game in San Francisco.

Ricardo is hitting just .211 in the tournament, 4 for 19 with a pair of RBIs. For what it’s worth, Kenley Jansen was hitting .077 as the Netherlands’ catcher in the 2009 tournament. The Dodgers turned him into a pitcher and Jansen became the team’s closer three years later. 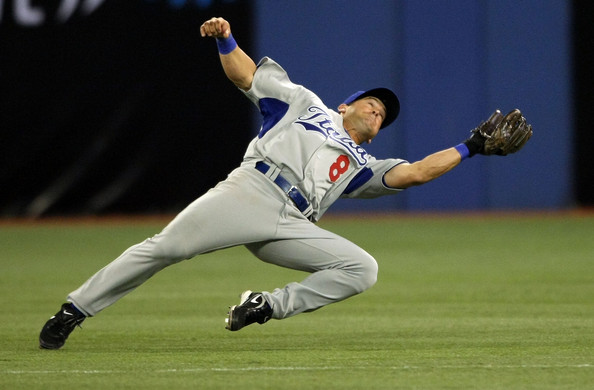 If you were particularly invested in Italy’s fortune at the World Baseball Classic, you’d think Nick Punto was worthy of a hero’s welcome upon his return to Dodgers camp Friday.

Instead, as he usually does, the Dodgers’ utilityman quietly went back to work at Camelback Ranch.