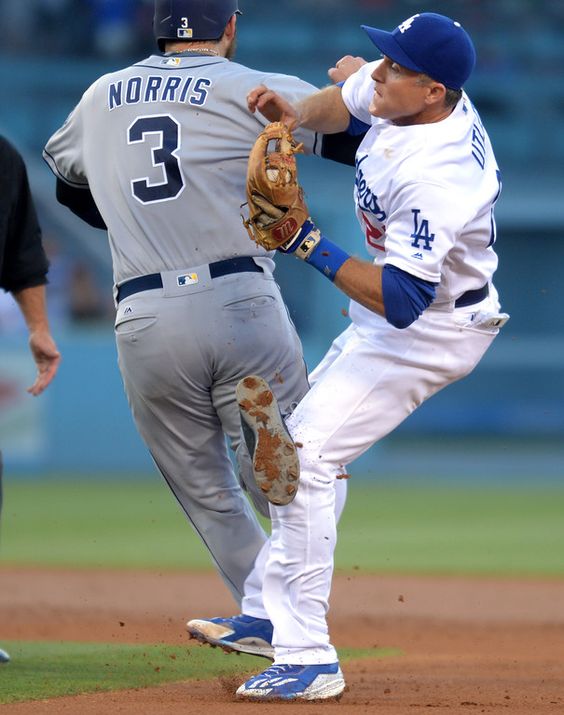 Dodgers second baseman Chase Utley and Padres runner Derek Norris collide between first and second base. Norris was called out for interference, and later left the game with a quadriceps injury. (Thomas Cordova/Staff photographer)

Yasmani Grandal had five hits, including three home runs, in the Dodgers’ 10-6 win over the San Diego Padres. The box score is here. The photo gallery is here.

Andrew Toles‘ second chance in baseball culminated with a promotion and a spot in the Dodgers’ starting lineup Friday.

END_OF_DOCUMENT_TOKEN_TO_BE_REPLACED 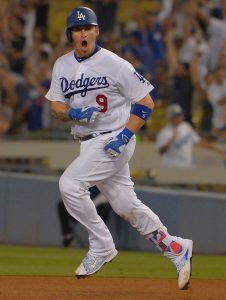 Yasmani Grandal shouts as he heads for second base after hitting a 3-run home run in the eighth inning. (John McCoy/Staff photographer)

Yasmani Grandal‘s three-run home run off Tanner Roark gave the Dodgers all the runs they would need in their fifth straight win, 3-2 over the Washington Nationals.

The Dodgers maintained their 5 ½-game deficit in the National League West behind the San Francisco Giants, who beat the Pittsburgh Pirates 15-4. The Dodgers visit Pittsburgh on Friday.

Eric Gagne passed the best-closer-in-franchise-history torch to Kenley Jansen, and only one of them wanted to be a closer at first.

Here’s what they were saying after the game:
END_OF_DOCUMENT_TOKEN_TO_BE_REPLACED

Yasmani Grandal suggested in his comments following the Dodgers’ 8-6 loss to the Milwaukee Brewers Thursday that the team needed to “play with fire.” It wasn’t so much that the fire isn’t there, the catcher said, but rather that the Dodgers “at times we feel like we know that we’re better than the other team, and we can lay back and relax.”

Grandal gave that interview after Dave Roberts‘ postgame media scrum, so Friday was the first time the Dodgers’ manager heard those words. His response was pointed and blunt.

Here’s what each man had to say on the topic of the Dodgers playing too relaxed:

Teammates had to separate Grandal and Justin Turner in the dugoutas they argued between the top and bottom of the seventh inning last night. Grandal made a baserunning error in the sixth inning that nearly cost the Dodgers a run. 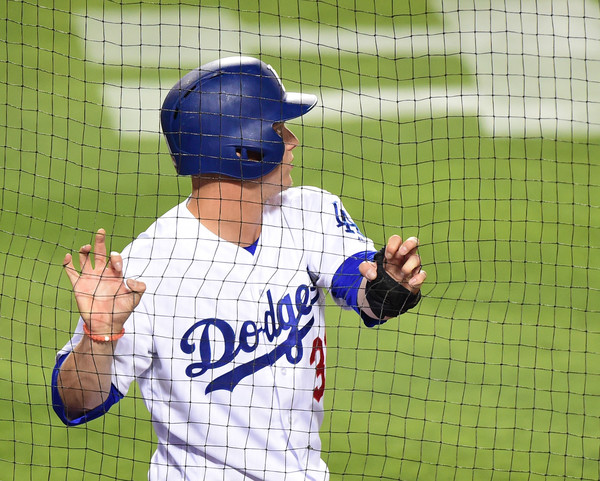 Joc Pederson watches and waits while his sixth-inning run is reviewed at MLB’s video room in New York. The run was upheld, but Justin Turner later argued with teammate Yasmani Grandal over the sequence. (Getty Images)

Yasmani Grandal and Justin Turner had to be separated by teammates in the Dodgers’ dugout Thursday when the two became engaged in a heated argument between the top and bottom of the seventh inning.
END_OF_DOCUMENT_TOKEN_TO_BE_REPLACED 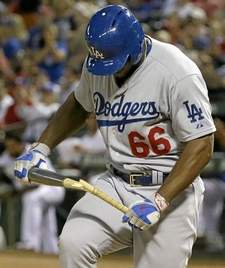 Yasiel Puig’s batting average has fallen from .400 on April 14 to .265 on Thursday. (Associated Press photo)

Yasiel Puig and Howie Kendrick were dropped to fifth and seventh, respectively, in the Dodgers’ batting order Thursday, but Dodgers manager Dave Roberts is sticking with the two through their free-flailing struggles.

Puig had a .405 batting average and .500 on-base percentage 10 games into the season. Over his next 12 games, those figures dipped to .140 and .159. This week, Puig reported to the batting cage for early work on the field with hitting coach Turner Ward and coach Manny Mota.