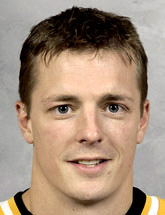 You had a feeling his days were numbered when the Ducks traded for Brian Sutherby.

Mark Mowers wasn’t here long. He was acquired in the off-season from Boston in exchange for two prospects (Nathan Saunders, Brett Skinner) and will go down in history as having played 17 games in a Duck uniform. (Shame he wasn’t around for the teal-and-purple days).

There’s a chance he could be back. Word has it he’s discussing his options with his family: whether to accept an assignment to Portland or play in Europe. Mentioned in print, Mowers’s name was usually preceded by the word “journeyman”; he’s played for four teams in seven seasons. It will be interesting to see where the 33-year-old from Decatur, Ga. journeys next.

You might remember that Mowers had a brief tenure centering the Ducks’ power-play unit with Perry and Getzlaf. That experiment didn’t last long; Mowers didn’t register a point on the power play all year. Here’s hoping Sutherby fares better on the top line.

More useless info:
Neither Saunders nor Skinner have played in an NHL game to this point, so it’s too early to call the Ducks a clear loser in that trade.
The trade leaves the Ducks with four active U.S.-born players: George Parros, Todd Marchant, Drew Miller and Mathieu Schneider.
Do you remember Mark Mowers’ only goal this season? Pat yourself on the back if you said the 4-2 loss to St. Louis on Oct. 23.