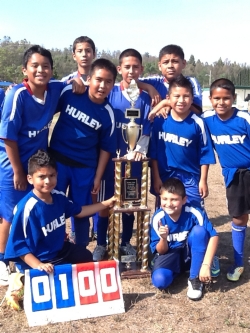 “The Final (Championship Game) was a rematch of last year’s soccer championship and just like last year, Hurley prevailed! This year’s game was very intense and closely played. Ivan Arellano of Hurley scored the only goal of the game while Hurley goalie Ramiro Pelestor made many beautiful saves to preserve the victory,” said Munguia.

“As the season progressed, our players played with increased vigor, enthusiasm and confidence, even when they were down on the score. We are very proud of our boys and girls for giving their best to the sport they love,” said Navarrete.