The speaker will be Leon Freeman, a planner for the Los Angeles County Department of Regional Planning. Freeman will present a comprehensive update of the county’s general plan now being developed.

The updated plan will provide a framework for housing and job growth in unincorporated areas through 2035. Rowland Heights and Hacienda Heights will be directly impacted.

The Regional Planning Commission will hold the first in a series of public hearings on the plan in downtown Los Angeles on the plan on Feb. 26.

The Los Altos Band is having their Annual Spaghetti Dinner fundraiser  on Tuesday, Feb. 4.

The dinner will take place in the Hacienda from 6 to 8 p.m. The Jazz Band will perform throughout the night.

The cost is $10 per dinner. Tickets can be purchased in advance from any band or color guard student, or at the door.

Three candidates will be running for two seats on the Walnut City Council on April 8. The candidates are: Robert Pacheco, Mary Su and Betty Tang.

Su will be running for her third term; she has served eight years. Su is the first Asian woman elected to the Walnut City Council.

Pacheco, 79, was appointed to the five-member City Council in July to take the spot of Tom King, who resigned and moved to Orange County. When he was appointed, he said he would run for the full term.

Tang is the lone challenger. Tang is president of Walnut High School’s Chinese American Parents Association and has been a resident of the city for 20 years, according to her campaign website. 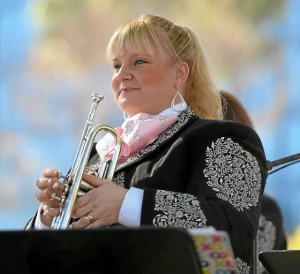 Family , friends, and music are three things that bring joy and come together in the class, Kindermusik Wiggle and Grow: Up in the Sky.

Using their imaginations, 1 to 5 year olds will fly kites, stretch like clouds, and dance like stars. For only $68, this class will explore all of the floating, flying, fluttering things we can find “Up in the Sky.”

Fire up your imagination because we will mean it when we say.. the sky is the limit. Classes begins February 13.

Art Innovators Preschool in Walnut shows preschoolers ages 3 1/2 to 5 years of age how lines of shapes can fit together to complete a whole. This hands-on class begins February 13, for $45.

For 5 to 12 year olds, Art Innovators teaches and helps you build your own portfolio. Learn to draw and explore a variety of art media including watercolor, pastels and metal tooling. Class begins on February 13 for $61.

Musica is Cindy Shea’s business. And business is great.

“I heard about it while riding in our car and I just started screaming,” Shea recalled. “It’s so exciting to be nominated again with my husband Alberto Jimenez Maeda, who does all our musical arrangements.”

The blonde musician was all smiles as the female mariachi band gathered by the ESPN Zone to thank their fans and families.

“With their fifth nomination, they have earned more nominations than any other mariachi band,” said Stan Freese, talent booking director for Disney Resorts.

“Our girls from Los Angeles have gotten more nominations than the rest of the world’s mariachi bands combined,” Freese said.

The talent director booked the Mariachi Divas more than a decade ago to play at California Adventure.

“They have been great ambassadors for the Disney Resorts. They recently headlined our new Viva Navidad celebration for the holidays,” Freese said.

Since then, Shea and the Mariachi Divas have become the official mariachi band for Disney. They perform weekends in the winter and daily in the summer.

When asked why he chose a female mariachi band over a more traditional male ensemble, Freese replied.

“I try to give our guests something they won’t see anywhere else. The Mariachi Divas are great performers,” he said.

Which doesn’t mean it has been easy for Shea and other women musicians in a largely male-dominated mariachi music industry. She has fought stereotypes and prejudice all her life.

“I told my parents when I was only 8 years old that I wanted to become one of the world’s best trumpet players,” she explained in an earlier interview.

Her parents agreed to pay for trumpet lessons once a week, but Shea realized that she would need much more training.

“I wanted to study with the best studio musicians in Los Angeles, so when I was good enough, I started giving lessons to other kids,” she recalled.

“When the dentist told my parents I needed braces, I refused because I wanted to keep playing,” Shea said with her brilliant, if imperfect, smile.

“When I joined the marching band at Los Altos High School, the boys didn’t want me to play the trumpet. They said it was a ‘macho’ instrument,” Shea remembered.

But the young musician not only played the trumpet, she performed so well that she unseated a senior as first chair.

“At one football game, the guys filled my mouthpiece with mud when I wasn’t looking. They thought it was hilarious when I marched out and tried to play,” Shea said. “They just made me stronger and more determined. There were so many times I could have given up, but didn’t.”

“He pushed me so hard that I got much better. He helped me pursue outside auditions.”

Later, Shea fell in love with jazz, enjoying the challenge of this American musical style. The Los Altos graduate studied music education at Cal State Fullerton, where she studied under trumpet great Bill Bing and thought about becoming a music teacher.

“I also had the chance to play for Latin jazz icon Arturo Sandoval,” Shea said.

Sandoval was so impressed, he offered Shea a full scholarship to Florida International University. The Hacienda Heights native moved to Miami to study under the Cuban jazz master.

When she returned to Southern California, Shea became a fixture in Los Angeles’ salsa scene.

The trumpeter performed in Yari More’s band and accompanied stars like Celia Cruz, the “Queen of Salsa,” at the Playboy Jazz Festival at the Hollywood Bowl.

Another opportunity beckoned when Mariachi Las Alondras, a female band, was looking for a trumpeter.

“I had to learn a new style mostly by ear. I also learned to transpose music on the spot,” she said.

When the female band broke up, Shea decided to start her own mariachi group. The Mariachi Divas was born in 1999.

“With my experience in many music genres, I wanted to create my own style,” Shea said.

Soon the Divas were performing their own interpretations of mariachi standards. Shea became proud of her band’s multicultural, innovative sound.

But right now, Shea and her musicians are looking forward to Sunday night.

“We’ll keep our fingers crossed and hope they win another Grammy,” Freese said.

Kids looking for more hands-on creative projects, love working with colors, paints, crayons then one of Walnut’s art programs may be right for you.

Young Rembrandts Preschool Drawing will help your child prepare for Kindergarten.This class teaches 3 1/2 to 6 year olds how to draw age-appropriate subject matter while they learn to follow directions, focus, and stay on task.

Do you enjoy building and love to play with LEGOS then Bricks 4 Kidz is just the right ingredient for developing that creative side. Bricks 4 Kidz will be offering two exciting courses this winter at Walnut recreation.

Preschool Alphabet with Lego teaches your 2 to 5 year old new letters, words, counting and patterns. Classes begin Feb. 7 for only $56.

Jr. Robotics with Lego will allow your young one to turn their Lego creation into a Robot, programmed to do exactly what they tell it to do. Classes start January 25, at only $125.

For more information or to register for any of these programs please contact the Walnut Community Services Department at 909-598-5605 or visit them online at www.ci.walnut.ca.us.

Lt. Saleeby is well known throughout Walnut, using his off duty time to give back to the community. He has formed many partnerships with local businesses who support the outreaches of Walnut/Diamond Bar Sheriff’s Station.