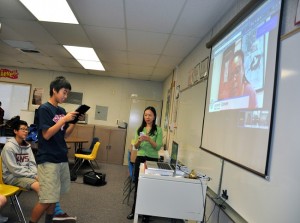 The Walnut school was one of three invited to participate in the conversation. The chat took place in Alice Chen’s eighth-grade language arts class. The event commemorates Martin Luther King Jr.’s birthday.

Google moderator Dawn Engle introduced Gbowee as an incredible woman who exemplifies the peace movement. The Liberian peace activist was responsible for leading a women’s peace movement that helped put an end to the second Liberian Civil War.

“I’m so delighted to be here and looking forward to your questions and hope we can engage,” the Nobel Prize winner told the assembled students.

Starting off, Engle asked why it was so important to honor the life and philosophy of Dr. Martin Luther King Jr. this time every year?

“First, I think Dr. King was in a class all by himself. When I sit and think of Dr. King, I think about the incredible work that he did,” Gbowee began.

She noted King started something at a time when everyone else thought the change wasn’t “doable.” As an agent of change, he was focused and disciplined, but wouldn’t be distracted by the negativity.

“In other situations in the world, people look at it and say ‘if King could do it, I, too, can do it’,” Gbowee said.

That’s why she says the Civil Rights leader was in a class by himself. King was a true trailblazer. That’s why it’s important to celebrate his life.

What’s the most important thing he taught us?

“I think the most important thing that Dr. King taught us was that we are the change that we wish to see or that we hope to see,” Gbowee explained.

“That it is in each and every individual, that no one is built without a certain degree of power, that each and every one of us has it in us to create change,” she added.

Gbowee said a second thing was change is only possible if you refuse to hate, because hate is so toxic. When you embark on a nonviolent struggle, you can’t afford to hold onto hate because it’s a deadly poison that propels you to violence.

“People who use guns and knives to solve problems are cowards,” she told the Suzanne students.

The Nobel laureate then took questions from the students.

“What do you see as the pressing issues that youth today need to be aware of?” asked 13-year-old Kaitlin Garrett of Walnut.

Gbowee replied that there are many issues, including rights of women, their peace and security. She noted it was easier in America for young men and women to take their liberty for granted.

“There are places in this world where people cannot sleep at night, where young people like yourself cannot find a meal and being a girl your age is the most dangerous thing, because there are so many abuses happening to young women,” Gbowee said.

They should appreciate what they have. Privileged teens would rather complain about little things like not getting the Xbox 360 they wanted for Christmas.

“It’s important that you get to that place where you begin to see your world, appreciate your world and decide how can I make a difference in some of the places where things are tough, beginning with my community,” Gbowee said.

Afterward, the Suzanne eighth-grader talked about how special the Google Hangout with the Nobel Prize winner had been for her.

“It was really cool listening in and having her answer our questions,” Kaitlin agreed. “It really makes me consider how I can become an agent of change in my community.”